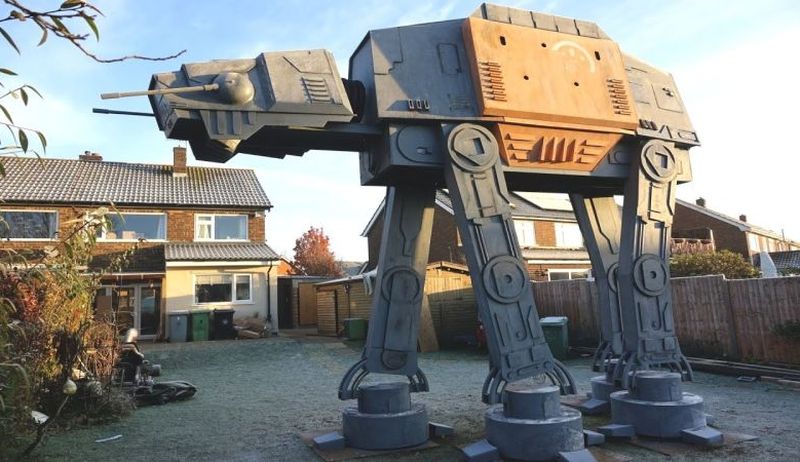 While some Star Wars fans might be content with Lego replicas for Christmas, the madcap British inventor Colin Furze has created a life-sized AT-ACT Walker playhouse in his garden. The 10-meter tall Star Wars AT-ACT Walker has been made out of the objects collected from eBay.

Furze, 36, has built the giant replica by attaching wooden panels to a metal frame, which was constructed in his shed. He has also attached a Chinese wok to one side of the structure’s head, whereas a paella dish is present on the other side to recreate and AT-ACT’s guns. He chopped off the handles from the dishes to screw on the fake guns.

To create the gigantic structure, he used AT-ACT Walker toy as a model and further multiplied all of the dimensions by 12. The resulting product is a huge ‘Imperial Beast’ for his kids to play in the garden. The AT-ACT Walker replica features a retractable ladder to climb into the structure.

Inside the AT-ACT Walker, you can see a complete intergalactic-style interior decorated with Nerf Guns, Storm Trooper masks and even action figures from the Star Wars franchise. This crazy construction by Furze comes as Star Wars: Rogue One hits cinemas next week.

Check out the video below to see the full-size AT-ACT Walker in his garden.