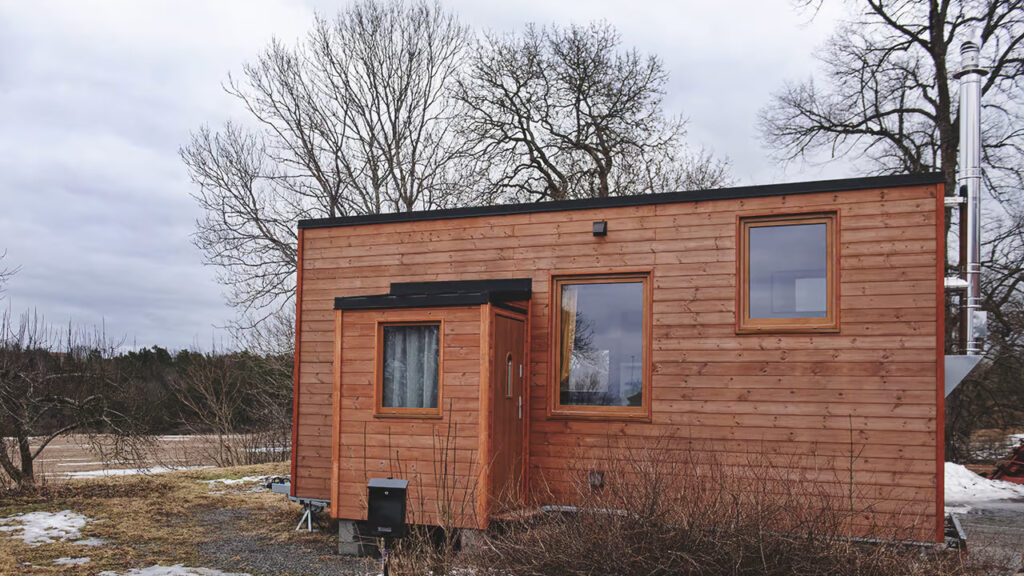 Vagabond Haven may not be a popular European tiny house maker when compared with the likes of Baluchon or Madeiguincho. However, their recent creations are garnering a lot of attention on social media.

I was highly impressed with the overall design of the Maya tiny house on wheels, but what clutched my attention was the glossy interior and bright interior of the 22-feet (6.7m) Sunshine tiny house.

With Elise tiny house, Vagabond Haven is moving one step further and making some changes to traditional tiny house design patterns which some of you might not have even thought of. Despite offering many finishing options with the likes of engineered wood, spruce, Shou Sugi Ban-treated wood, and cedar exterior, it’s the interior that gets the tiny house into the limelight.

So, why is Elise the talk of the town? It is because the tiny housemakers have literally lifted the living room above the child’s bedroom. With most tiny houses you usually enter inside, you are graced with a living room equipped with a sofa and a center table but with Elise, it’s different. You’d have to directly step into the kitchen area.

Equipped with an oven and stove, a fridge, sink, an optional dishwasher, and decent storage space, the kitchen has everything you need for a comfortable stay. Adjacent to the kitchen is a dining area that is comparatively smaller in size but can seat four people with ease.

One side of the kitchen features a child’s bedroom with a bed and some storage space. There is also a large porthole-style window that allows the little chap to peek outside.

On the opposite end of the child’s bedroom is the bathroom equipped with a washing machine, shower, sink, and composting toilet. What’s intriguing is the fact that above the bathroom is the main bedroom for the parents. The loft bedroom can be reached by a removable ladder and has reasonable storage space.

Sitting on a double-axle trailer, Elise tiny house is also available in off-grid configurations with solar panels, water tank and a rainwater collection system. The base price of the tiny house is currently stated at $39,000. For more information or queries, visit the official website of Vagabond Haven.