Living Christmas tree – Life Tree made up of aquariums, LEDs and water

By BharatNovember 28, 2013No Comments1 Min Read 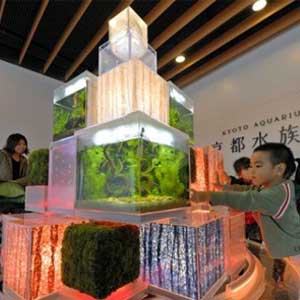 The gold Christmas tree was priceless, and this picturesque Christmas tree made from aquariums, LED lights and water is filled with life. Dubbed the Life Tree, the living Christmas tree comprises of a total of 25 aquariums packed with moss, LEDs and Japan’s favorite amphibian. The Life Tree is on display at the Kyoto Aquarium, it will be there for the world to see until December 25. The Life Tree measures two meters tall and has four color LEDs, which are used to illustrate the four seasons on earth.

The Red LEDs are used to symbolize the color of falling leaves in autumn, while the White LEDs depict the color of snow in the winter season. The Green LEDs express the greenery of spring and the bright blue sky of the summer months is symbolized by Blue LED lights. In addition to the LEDs, the aquariums stacked together to form a Christmas tree are filled in with moss, waterweed and Japanese fire belly newt.