Walking Table is a Combo of Clever Engineering and Badass Design

What’s better than a standing table? One that walks! 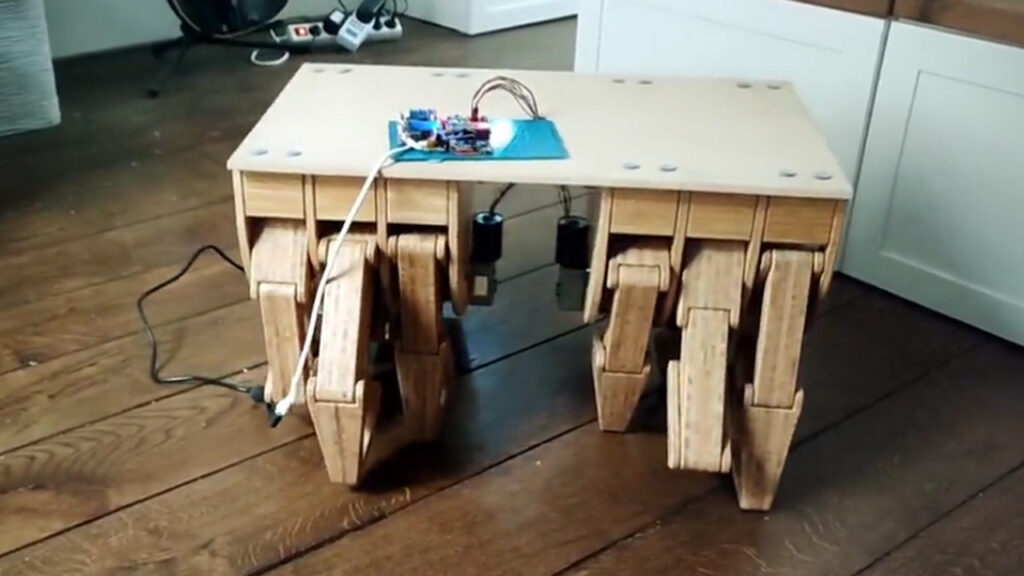 What’s the most bizarre thing you’ve seen in the furniture design niche? Is it a chair that houses your cat or a supercar-inspired coffee table? Well, you may or may not have come across something like that, but the design world is full of quirky and inspired pieces. Take this 12-legged ‘Walking Table’ by Giliam de Carpentier for instance.

Unveiled on Twitter, the Walking Table can literally walk or crawl like a crab, if you will. Built by the Dutch maker, the table can get around on its own. This could be a wonderful innovation for people with disabilities. However, there is more work to be done to mass-produce these pieces and ensure optimum functionality.

“Turns out my table can actually WALK as well as I hoped it would,” the Dutch maker tweeted along with a video. The video soon went viral on the internet and netizens started peppering comments on his tweet. ‘Wife wants to rearrange the furniture? No problem,’ joked one Twitter user. Another stated, ‘Death by robot coffee table not on my 2022 bingo.’

Finished designing, building and assembling most components: Turns out my table can actually WALK as well as I hoped it would! Next steps: Implement remote control, connect a battery, and open up the throttle… pic.twitter.com/m7l8SIAKzA

Further speaking on his creation, de Carpentier, an engineer for a gaming company and the man behind the walking table, informed, “I made all wooden parts from cross-laminated bamboo, they only connect to other parts via steel rods with ball bearings, and there’s at least one-mm of distance between every wooden part.”

He further informed there are two motors that are connected with programmed microcontrollers and rollers to help the table walk. In the video, we can see that the table moves smoothly and at the desired pace.

This shows the the walking table's leg mechanism in more detail. So 6 legs, 1 crank and 1 motor for each end of the table, and then drive it like a tank. pic.twitter.com/4c6sjESMji

Also Read: This Wacky Ping Pong Bicycle Table Will Leave You in Splits

The designer is in no hurry about mentioning the price, nor did he comment on making more such pieces. However, the best thing about the whole creation is that it’s not a concept but rather an actual product.