This Wacky Ping Pong Bicycle Table Will Leave You in Splits 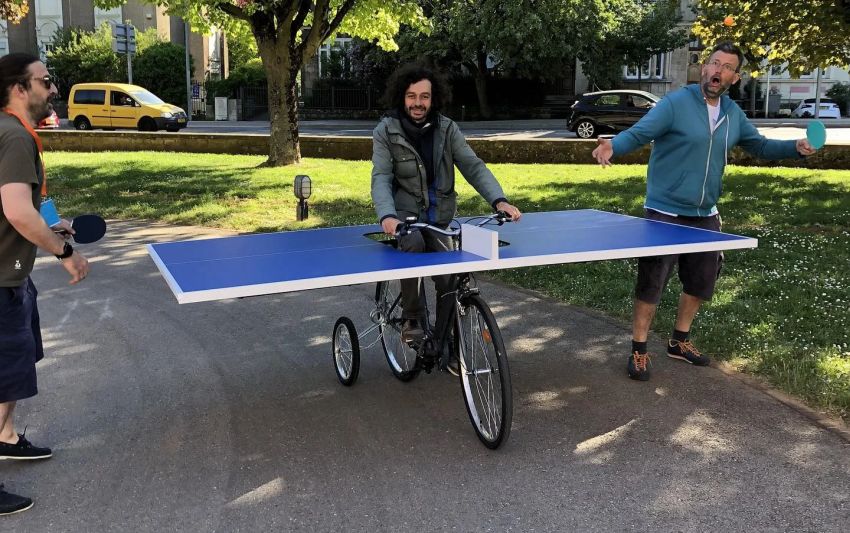 Nobody is more notorious in the design world than the French artist Benedetto Bufalino. The man is known for his creative designs and puckish concepts, which include a retired city bus transformed into a swimming pool and luxury cars turned into functional street food cart. The French artist even converted an old white Sedan into a ping pong table back in 2016. While all his past creations are near absurd, the latest in the ranks is even quirkier.

This time around, Bufalino has created a wacky ping pong bicycle that will leave you wondering why? This isn’t your classic ping pong table to be placed inside a premises, rather it is a moving TT table with wheels in the base. To be more precise, the ping pong table is poised and incorporated cleverly onto a bicycle.

If you are still confused; imagine it to be a simple table that’s built over a bicycle. It is equipped with two wheels that offer easy transportation between or even during games. What this means is, the table would move when someone peddles the bicycle.

Well, the table does seem to wobble a bit but that’s because it’s heavy. Nevertheless, two people can still play a moving ping pong game while the bicycle is being ridden by a third person. In case you are a confident rider and have good reflexes, you can simultaneously play and peddle, maybe! Well, it seems a little difficult and absurd much like the core specialty of this design, which is as nutty as a fruitcake.

In case, you haven’t checked out the crazy video of playing ping pong on a bicycle, visit Benedetto Bufalino official Instagram account, where his latest creation is garnering a lot of attention for its playfulness and hilarity.