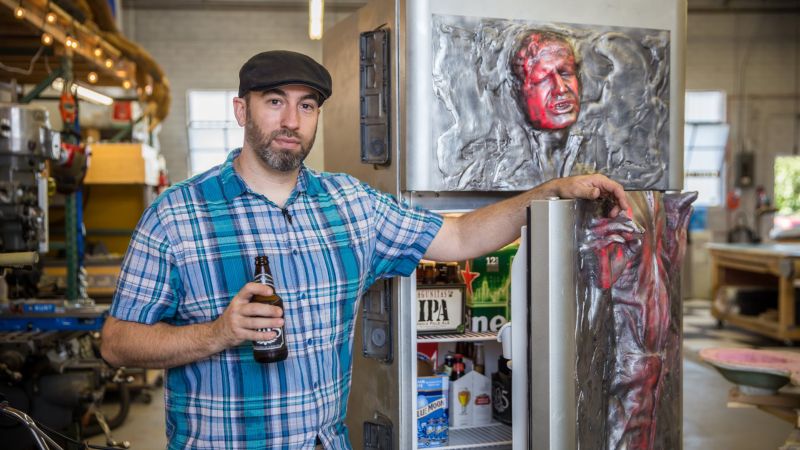 Frank Ippolito, movie effect artist, has trapped Han Solo in carbonite refrigerator. The artist has brilliantly managed to recreate a memorable Star Wars scene, where Han Solo is imprisoned in frozen carbonite. On the refrigerator door, you can see the replica of the famous Star Wars character. Plus, it has even got a red glowing effect behind the carbonite.

Ippolito sourced its parts from the Star Wars replica prop community. He began with a silicone mold that was detailed with Han Solo assets such as face, body, and toes. Finally, ended up with blinking side panels, Bigturc’s greeblies and Fettronics for lighting effects. This Star Wars-inspired fridge can be fully loaded with foods and drinks. It would definitely make Jabba the Hutt really happy.

With this decorative Han Solo in cabonite refrigerator, the maker can display the captured space rebel for everyone to see. We are not sure whether Ippolito is going to make it for commercial market or not. But this cool refrigerator certainly would be a great addition into any Star Wars fanatic’s kitchen.

For now, you can check out the video that’s posted on Adam Savage’s YouTube Tested channel Wednesday. In the video Ippolito is showing Norman Chan, Tested editor, the step-by-step process he has used to transform a boring refrigerator into a mind-blowing movie prop.