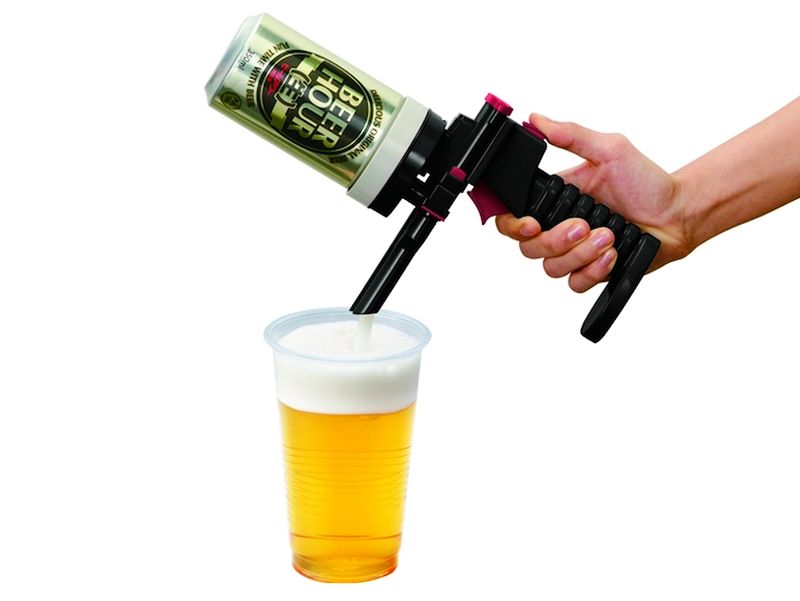 For beer snobs who are fussy about the right amount of foam on their drink, Japanese company Takara-Tomy has come up with perfect Beer Hour Stadium Foamy Head Dispenser. It is basically a plastic beer gun that’s designed to lock on the  top of any 350ml beer can. Once attached atop the beer can, it can shoot out beer with right amount of frothy head on your drink.

All you need to do is attach a beer can to the top part of this gun-like unit. Once the can is fixed, pull the trigger and start pouring the desired amount of beer into your glass or mug. After pouring beer into a glass, it’s time to add foamy head that can be formed by lightly shaking Beer Hour Stadium and finally pressing the ‘foam button’ on the back.

This way a perfect looking beer will be served in mere seconds, without depending on complex beer pouring machines. The unit is quite easy to setup and can be used anytime, anywhere with no mess around you.

Influenced from Japanese ‘beer girls’ that pour drinks for baseball fans at major games, the beer dispenser works similar to beer-guns that are attached to mini-kegs on the beer shoulder (which is carried by beer girls).

Available in two color combinations i.e. black and red, and gray and yellow, the Beer Hour Stadium can be yours for US $40 from JapanTrendShop. You can also check out the video below to catch it in action.