Ceiling drop down TV appears/disappears at push of a button 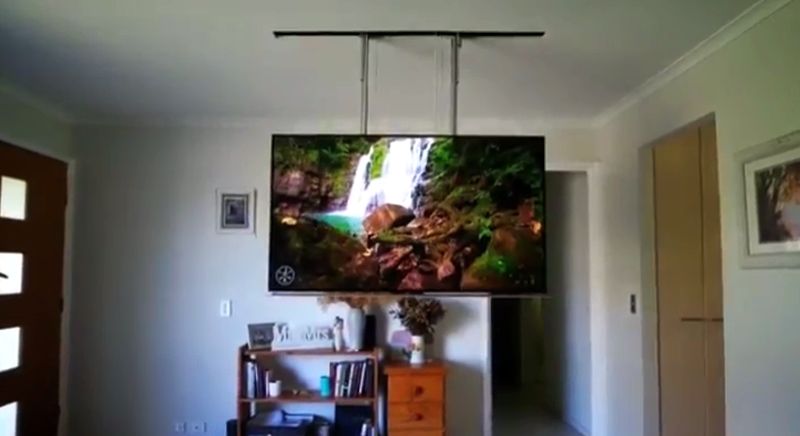 Unlike traditional TVs, flatscreen televisions have slimmed down dramatically over the years. Still these flat panel TVs need a lot of space in a room. But Imgur user [SlimJones123] has found a clever way to make it disappear until required.

Instead of mounting the flatscreen television on a wall or a TV table, the home hacker has managed to form a slot in the ceiling. This tiny slot is enough to squeeze in the TV set, which further can be ascended or descended from the ceiling via remote control.

Precision-engineered for ease of installation, this system consists of a remote-operated counterweight pulley system. So at push of a button, the living room can be turned into a personal entertainment space. Wondering how much living space has been occupied on the upper floor? Well, the answer is none. This is because there is an empty attic above this living room. [SlimJones123] has intelligently made use of the attic space that otherwise was of no use.

Ceiling drop down TV setup is a great option for anyone living in limited space apartment, provided no one is living on the upper floor. Similarly, you can also turn your ceiling into a convenient hideaway for your TV. It is indeed a cool way to keep any flatscreen TV out of sight. Even if someone breaks into your house, they won’t be able to find your expensive TV. After all, who looks at the ceiling.

Find out how people are reacting to this ‘hidden TV in ceiling’ on Reddit and Imgur.