It features two angled wood structure that functions as a support to the glass table. 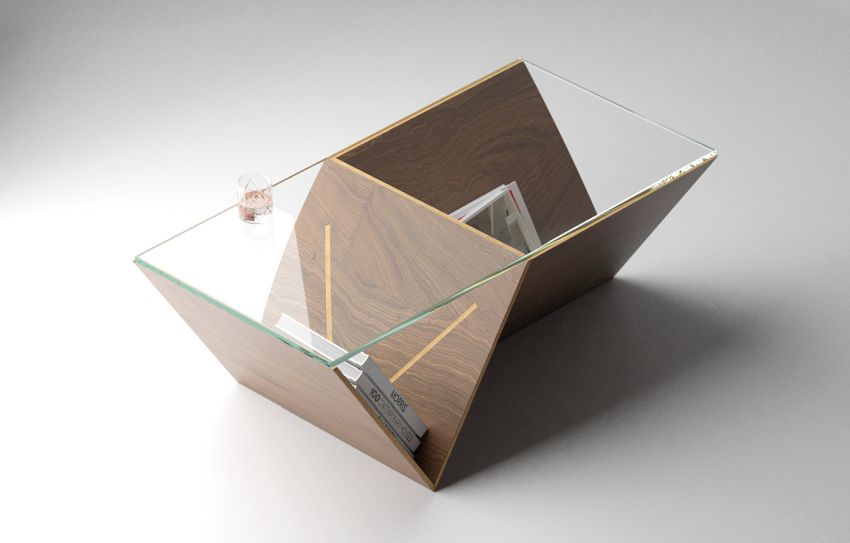 I am almost obsessed with designs by Deniz Aktay. My infatuation started when I came across the Spinning coffee table and it turned into an obsession of sorts with the sight of the minimalist lip coffee table. With every passing day, the German designer keeps on impressing me even more with his riveting product designs.

Aktay follows a pattern where his sketches and illustrations are visualized in 3D rendering. With digital art software coming to his aid, the Stuttgart-based designer has now introduced a Converse coffee table and it looks absolutely fantabulous to me.

Let’s talk about the coffee table design. The coffee table features two angled wood structure that functions as a support to the glass table. Sitting in the living room, it would make an expressive table that’ll demand some conversation.

“The main idea of this design piece is based on the constructional concept of two linear supporting elements positioned perpendicularly to each other. These linear elements manifest in the tips of two wooden angles harmonically and geometrically attached to each other,” Deniz told Homecrux.

The base of the table even looks like a half-opened book and can actually be used to store books and other stationery. Overall, the tabletop is made of glass and nested smoothly in special cutouts.

The strength of the concept table lies in its simplicity characterized by the minimal use of elements with simultaneously generating very interesting and surprising interspaces and viewing angles.

“One wooden element breaks partly through the other which generates a nice detail. The two angles lying on their linear tips not only are constructional interesting but also provide additional storage area which is a perfect use of the given space, the designer added.

If someday, Aktay is able to turn the render into a full-fledged product, I’d be the first one to knock on his door and ask to have it delivered.

Aktay previously told Homecrux that some of his designs would soon be made for real. In that case, I hope he finds someone to manufacture the renders to their detail and bring the output to the market in an affordable price range.

Also Read: The Spring Low Coffee Table by Deniz Aktay is a Beautiful Piece of Art

Considering that, it would not just be a geometric brilliance but also a massive feat in the design world. But, for now, all we can do is satiate our eyes with the glorious design and await more designs to come.