Made of bent metal sheet 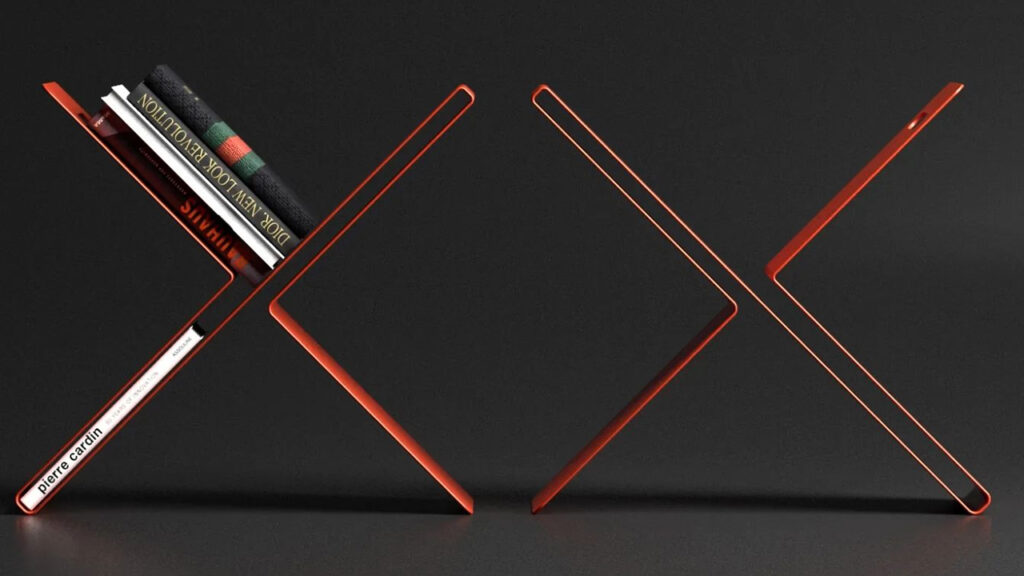 Deniz Aktay is an absolute beast when it comes to creative mentality. His hyper-realistic renders are all over social media and the German designer enjoys a large fan following as well. After receiving a lot of praise for the Bookgroove bookrack table, Deniz brings ‘The Nonstop rack’ which is characterized by a continuous bent metal sheet generating different areas of storage.

“I can find inspiration in many places but mostly I get inspired by other related arts like music, painting, sculpting, and fine arts,” says Deniz to me. Well, it seems his inspiration this time was the English alphabet. Meant for storing around five to eight books, the design of the rack is somewhat similar to the letter X.

The curbed metal bending on two sides allows you to stack a single book in the gap while the rest of the books can be placed on the V-shaped formation the two top planks end up making. The rack can also be flipped to accommodate storage on the other side. There is also a small groove on one of the metal sheet which I assume is to handpick it and place somewhere else.

“As a student, I just couldn’t afford to prototype my creations. 3D designing allows you so much freedom in your creativity which is necessary to come up with new ideas and concepts,” said Deniz to me in interview months back. I conducted the interview at a time when Deniz was just bursting into the scene as an amateur 3D renderer. With the release of Bookgroove, which imploded on social media, the German designer established himself as a render furniture designer and is seeking manufacturers to fund his creation.

Also Read: This Pet-Inspired Furniture Series is Made From Brass

“And while getting more and more visible on social media, I could attract attention from various interesting manufacturers – so my first professional jobs in designing and furniture realization as well as in visualizing them are just getting started,” said Deniz. Getting back to the Nonstop rack, it can not only be used to house books but also serve as an interior decoration piece. It is undoubtedly elegant but at the same time a nice functional piece for your home.