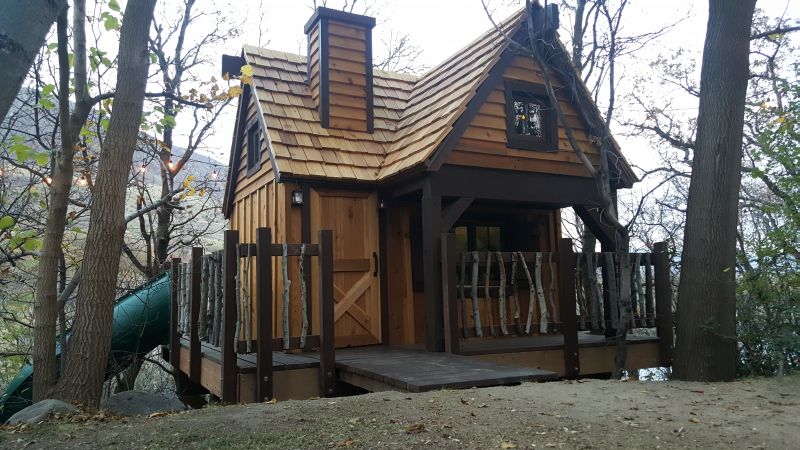 Many People have dreams of living in a house nestled between trees, but more than this, an Imgur user TreehouseBuilder wanted to build a treehouse since his childhood. His wish is recently fulfilled when one of his cousins asked him to help in making a treehouse for their family somewhere in Rocky Mountains of the Western US. Actually, he raised a fantastic tiny wooden dwelling on post foundations with a wrap around deck and a covered slide for the kids.

He recommends making a full-proof plan before starting project like this, as he did himself through Auto CAD and simple sketches. Determining the best place to make holes for making footings was among the crucial tasks in the project. All four footings were filled with concrete and crushed rock to ensure strength and sturdy support for the whole structure. Finally, sonotube piers were placed on their top, and a few days after, 6×6 posts were connected through Simpson Strong-Tie zinc coated post base to the footings.

After cutting the posts to a suitable height, floor framing with double joists, beams and knee braces were added to provide lateral capacity. Joints were attached to beams using zinc coated hurricane ties for maintaining uplift capacity. Then all redwood railing posts were attached to the outer rim joists and decked with wood spindles collected from the site. For decking, rot-resistant redwood is a great option, so he utilized it well and also built a suspended bridge. The remaining area of the floor was furnished with OSB.

The next step was to frame walls, so he made three wooden walls independently, and decided to build the fourth wall in the treehouse structure itself. After placing joists and gable walls, the ridge beams were hung on each other using concealed flange hanger. Roof and wall sheathing is accomplished using OSB connected through nails. Framing/Sheathing of dormer and chimney was done side by side.

Exteriors were furnished through heat treated cedar siding with a clear sealant. The walls were finished using board and batten, while for gable walls, boards were cut to create lap siding. After that roof drip edge and fascia board were installed. Additional knee braces were added using timber screws as extra support for the deck.

The cedar wood shingles completely covered the roof and dormer as well as the lap siding on the chimney for a cool look. Now every place in the exterior of the treehouse with the possibility of water leakage was sealed using silicone caulk. Later a slide was also attached to the railing as an interesting feature for the kids.

Same kind of cedar wood was also used in interior finishing and for making doors for the house. He also made a bench alongside the staircase for the loft made of redwood.  Sliding doors and rafters were made of redwood and a deer head made by one of their relatives was also installed on the gabled roof. A rope was also attached to the bucket to supply things from the back deck to the ground or vice-versa.

The final treehouse looks like a great holiday retreat for the family. The all round woodwork is appreciable, and the gabled roof with cedar wood shingles looks more attractive. The house has attractions for kids as well as for the elder members of the family. When the treehouse is fully-furnished, the house will serve as an awesome guest house. The way he explained all the things he did in the project is well inspiring for people striving to build similar treehouse.