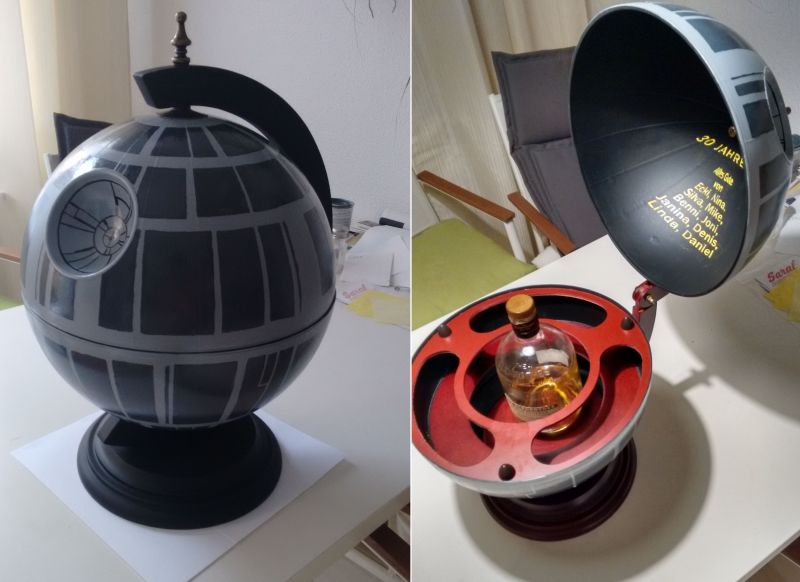 Does anyone else find Death Star similar to a globe? Well, there is nothing really common in a globe and Death Star, except for their round shape. Probably, thinking the same, Imgur user [Sharkalligatorman] has recently converted an ordinary globe into a Star Wars Death Star Globe Bar.

The DIYer has not exactly cut a real globe apart to create a home bar. In fact, he has purchased one globe bar from Amazon and given it a Death Star makeover. Using a lock saw, a hole has been drilled into the upper half of the globe, as well as, overlapping plastic and paper was cut in a circular pattern. Later, a spoon holder dish was fixed in the hole to form the same depression, as on Death Star.

Afterward, the entire globe was painted gray on the outside, and black inside. Next part was to hand paint the pattern of the city sprawls and trenches on the gray surface. Even hanger of the globe has been painted black to match with the Death Star’s appearance.

On the inside, names of the people, who were involved in the project, were written using yellow acrylic paint. The final product – DIY Death Star Globe Bar can be used to hold one bottle of the desired spirit. It can be placed anywhere in a living room or home bar to give intergalactic flair to the environment.