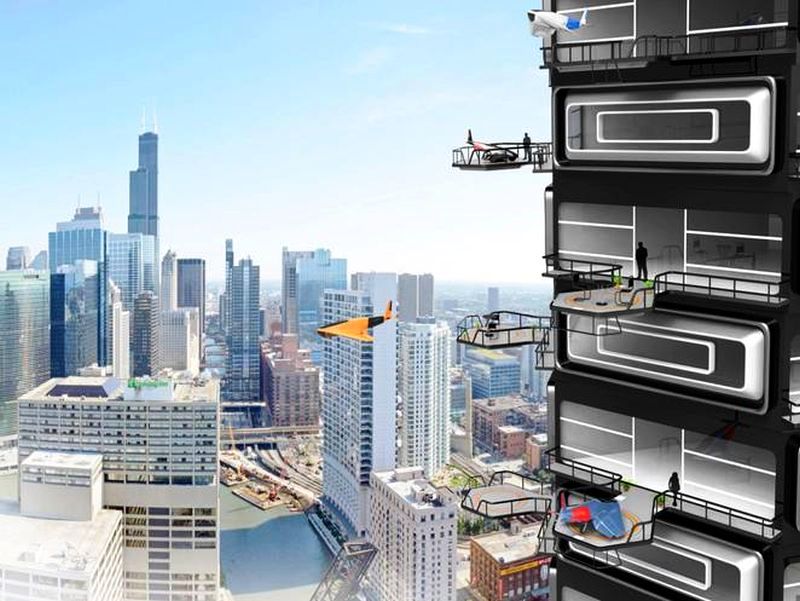 Drones have taken the world by storm, and are becoming major part of our lives. People are using drones for military missions, marketing, delivery services and what not. But soon these flying objects might become part of our architectural environment as well.

In collaboration with industrial designer Ashish Thulkar, mechanical engineer Charles Bombardier, who is also part of the Bombardier family, has offered a conceptual interpretation of drone-friendly apartments. Titled as Drone Tower, the futuristic condo building will include apartments with large balconies built to accommodate small electric aircraft or shipping drones.

Although drones for delivering are already used by companies like Google and Amazon. But according to Bombardier, in future these drone runways could be used for more than just delivering goods. These drones could actually be used for personal transportation via electric flying vehicles. So, they must be in need for a landing space. For that, the clever engineer has come up with this Drone Tower building concept for drone landings.

One wouldn’t need to have their personal drone to live in these apartments, they could simply order a ride with an app like a taxi, and just hop in right from their balcony. The apartments will also be including robotic furniture that would detect approaching vehicles and make space for landing.

Bombardier is hoping that the idea might intrigue some innovative architectural firm, who could invest in a ‘drone-ready’ condo tower in Japan or Dubai in the coming months. We’re not sure whether we’ll be able to see such futuristic building in coming years, but this revolutionary idea will surely change the way of transportation forever.