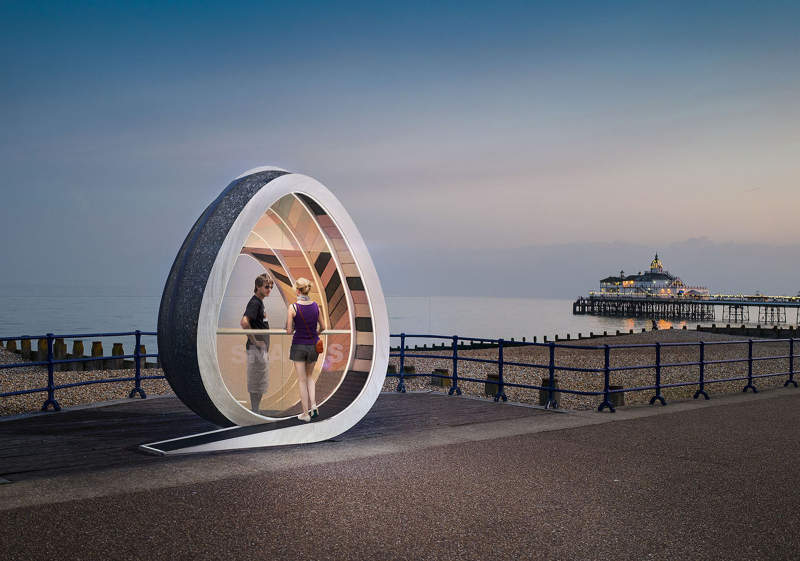 Miller Kendrick Architects – the London-based architecture firm, is poised to bring newest designs to the fore, and the latest Flint Hut is one such effort that might inspire you to spend some more time on beaches. Its spiraling structure is inspired by seashells.

The hut consists of curved marine-grade plywood fins that are cut on a CNC machine for easy on-site assembly. Colored cushioning made of woven recycled plastic works as the wall paneling. The exterior is covered in knapped flint for unique appearance and durability to withstand the harsh marine environment, whereas the interior walls comprise reclaimed timber boards spanning between the fins to form colorful internal lining to make the space look cozier and aesthetically appealing. Each board is pre-cut and drilled to prevent wastage.

The pod is just a concept for now that features no space for sleeping. It can house two to three people looking for a private space in public places like beach. If looked from a distance, it looks more like a glittering egg.

Previously, Miller Kendrick designed Arthur’s Cave pop-up hotel for the Year of Legends 2017 campaign. Under this initiative, the Government of Wales planned to pick eight glamping units to place on different locations across Wales as unique holiday retreats. Arthur’s Cave is one of them that saw the light of day at Castell y Bere, Wales in May 2017.