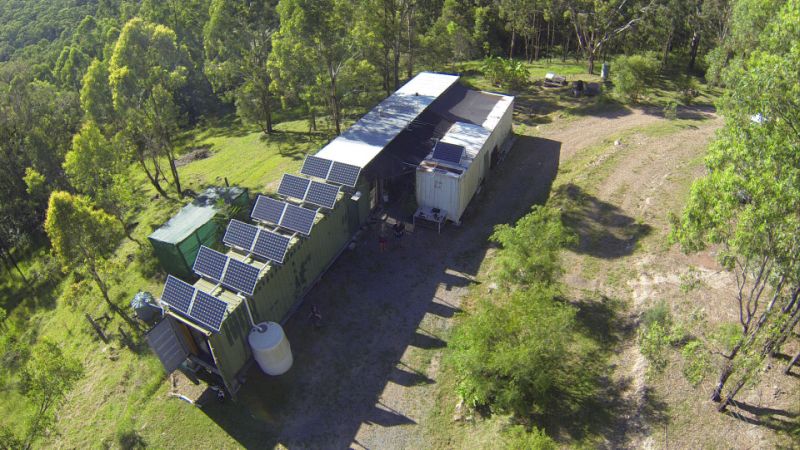 Former RAF Corporal Paul Chambers, originally from Lincolnshire, has created the ultimate off-grid home out of two shipping containers in the middle of nowhere in the Australian Bush. He was inspired to created this outback retreat after he and his wife Sarah were totally fed up with their noisy neighbors.

The old shipping containers were bought by Paul from Costco Containers. Earlier he specialized in building military flight simulators for the Royal Air Force, and his skills were quite useful for him in building this container home with free energy. The £36,000 container home is located 62 miles from civilization near Newcastle, New South Wales.

According to Paul, the shipping containers were well-used but in good condition, and he took quite some time to transform them into their self-sufficient home. Their new home is close to nature and wildlife – as wallabies are often seen hanging around on their premises. To be self-sufficient of power, they have installed solar panels and rainwater harvesting systems to the building.

The homeowners not actually have a completely off-grid lifestyle, as they do have an internet connection that Sarah uses to run her online business. This container home is the first in the world to have a stained glass window, which is made by Sarah under expert guidance. She also enjoys doing her gardening, so there is also a special green area just a few steps down from the kitchen.

For heating, they’ve built their own log burner out of an old Chubb safe. The bathroom has an unconventional toilet – as it’s without a composting toilet. A wall of glass share their private moments while bathing with the wallabies and other wild creatures. Both Paul and Sarah seem to be enjoying their new life in this container home peacefully in the lap of nature.