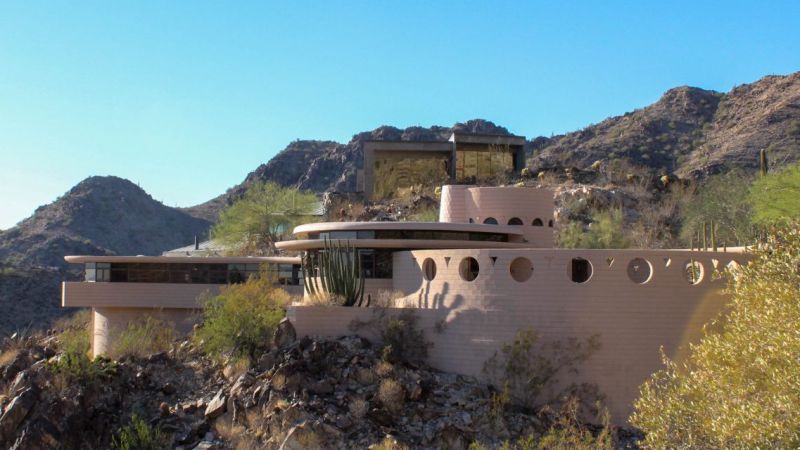 Veteran American architect Frank Lloyd Wright has designed more than 1,000 houses in his entire lifetime, out of which 532 are completed till date. If you’re a die-hard admirer of his organic architecture, you have a chance to buy the last ever house designed by the legendary architect. Dubbed as Norman Lykes house, this 2,900-square-foot home can be yours for $3.25 million. Frank Lloyd has designed the Norman Lykes House in 1959, and after his death, it was completed under the guidance of John Rattenbury in 1967.

This circular home with rounded windows and walls, custom built in furniture, and a crescent shaped pool is perched on a mountain overlooking Phoenix with a 180-degree view from the living room.  Spectacular inside and out, yet noticeably calming, its curves follow the mountain backdrop.

Initially, the Norman Lykes house was designed as a five-bedroom, three bathroom house, but now it has been refurbished with three bedrooms and a large master bedroom. Due to the mountainous location, this designer family home offers breathtaking views of the city from living room and other living spaces too. There are big windows to bring in natural light as well as surrounding views.

Inside, there is immense use of wood to reflect rustic aesthetics. This Frank Lloyd Wright-designed circular house featuring woodsy interior includes an abundance of storage spaces to ensure full convenience. Alongside the kitchen and living room, there is a small television room, which was previously designed as a workspace. There is also a spiral staircase leading to the adjacent living room.

Update: This round home designed by Frank Lloyd Wright will be sold through a without reserve auction to be held on October 16, 2019, at Heritage Auctions.