Watch blown to the scale of a coffee table

By BharatNovember 23, 2022No Comments3 Mins Read 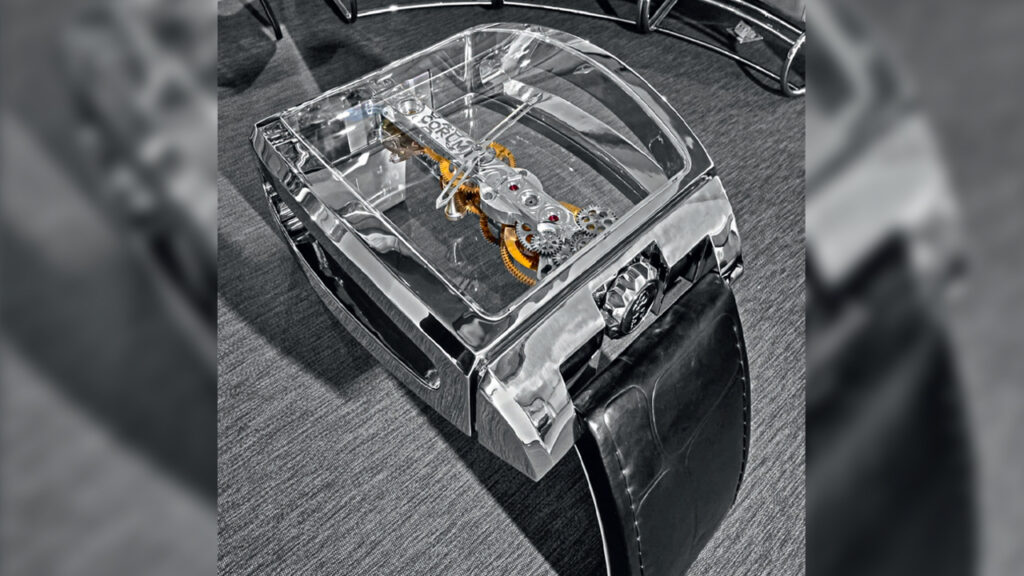 Corum Golden Bridge is a classic fascination in timekeeping; a testament to Swiss watchmaking. For watchmakers haute horlogerie is a personal thing, limited to the wrist or wall, but a metal sculptor has taken artistry to a new high by placing the Golden Bridge right in the center of your living room in a size 20 times the inspiration watch, which is an exemplary interpretation of the openworked dial.

The idea of taking a horology marvel and blowing it up in form – for the wall – is not a novelty in 2022; to replicate a watch to the scale of a coffee table, you can sit around and appreciate, is high-end craftsmanship par excellence!

Going by how Colombia-based metal artisan Pedro Costa has conceived it, this sculpture – for a home devoid of a table clock – is a fantastic replica of the Corum Golden Bridge Classic watch. Crafted in the form of a table, the Golden Bridge imitation is a functional timepiece that can be used to place your coffee mug or a magazine (the beauty of it will stop you from covering its aesthetics up).

In all fascination, the Golden Bridge is reckoned for its liner movement, built in a straight line. The watch perhaps has the most legible openworked dial I have seen and this incidentally is mimicked to perfection in the Golden Bridge Coffee Table. Arguably then, it’s a collectors’ kind of table, whether you’re a Corum collector or just someone looking for an incredible piece of furniture that fits right in your home sharing your love for watches.

The table is constructed chiefly of stainless steel, though aluminum and glass have a significant role to play in the detailing. Like the watch itself, this table has sapphire crystal on all four sides of the astonishingly accurate case, while the crown – used to set the time – is placed at the bottom to enhance the design minimalism.

The heart of the table watch is the mechanical movement designed to look exactly like the golden bridge movement on the eponymous Corum watch. Akin to the magnanimous size of the table, the movement is 20 times the size of the one on the original watch, and is brushed, polished, and matte-blasted to look identical.

Golden Bridge coffee table weighs a little above 66kgs. It is powered by a rechargeable battery that offers up to six days of power reserve on a single charge. Sturdy enough to withstand bumps and accidental knocks, the Golden Bridge watch for your living room is made to order. An exact replica of the Corum Golden Bridge can be delivered in less than four months from order for a mind-blowing 90,000 CHF (roughly $95,000).