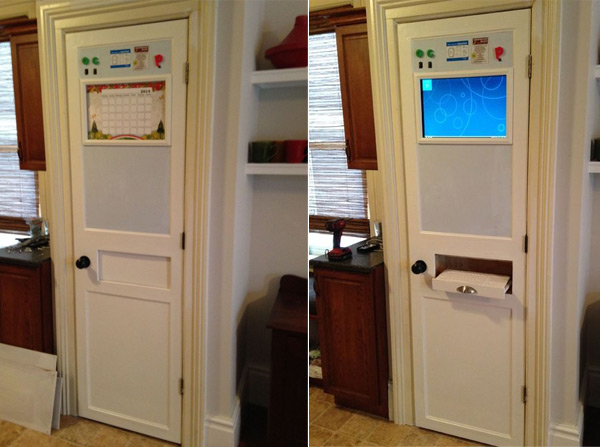 Some of us love to use cookbooks all the time, and there are others who use tablets and smartphones to read out recipes. Idea is the same, and the prospective problems are similar too. Inevitably you spill something or the other on the cookbook or the handheld while cooking. A better idea is to have a computer tucked away in the kitchen door, which is at a distance from the cooktop. To make this a reality, Instructables user designforhire has placed an old computer and LCD monitor on the pantry door, which can be used to look up recipes, listen to music or watch videos. At the onset, it looks as if the hack is retrofitted with serious tools, but this is actually a modest yet chic entry for the Instructables’ Hidden Doors/Secret Compartments contest.

The modder replaced original door with a frame made out of pine studs and hardboard sheets for ease of placing the computer parts. On the new door, LCD monitor is placed on the top, followed by keyboard in the middle and the CPU in the bottom (all connected with cables flowing down through the hinged side of the door). When not in use, the monitor and keyboard remain covered with a dry erase calendar and a blank panel respectively. The covers however are motorized and can be opened by pressing two black switches just above the monitor. Hit the jump to see the video.