Houseboats in Britain Made from Old Buses, Speedboats and Planes 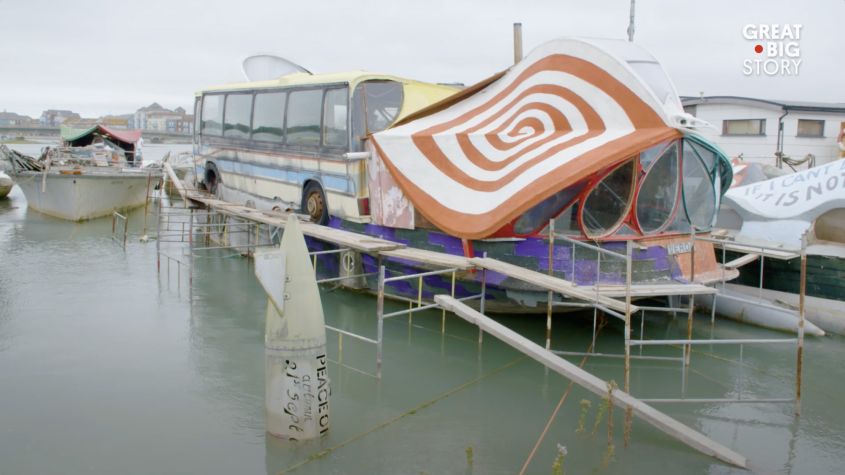 Hamish McKenzie, a British artist, and houseboat renovator lives in his one-off houseboat made from discarded buses, vans, speedboats, and planes. He owns seven such houseboats, which are parked amid a small community of 50 houseboats in West Sussex, England.

There was a time when Hamish was homeless, but today he has built himself a fleet of unique and affordable homes using his wicked imagination and carpentry skills. In addition to auto spares, Hamish repurposed a number of discarded objects for these whimsical houseboats, for instance, an old microwave for a mailbox and giant tractor wheels for windows.

Currently, he lives in a houseboat he calls the Verda. It’s based on a tube train but is made using an old ambulance, speedboat parts, and a public bus. It has a living room, kitchen, bedroom and a plenty of storage space. Verda features a unique front window made from a discarded jumbo jet. Impressively, from wooden interiors to furniture and decorative pieces, all of it is made of unused and discarded material.

It goes without saying that each of Hamish’s houseboats has its own unique look and feel. There are many interesting contraptions within these repurposed houseboats, one of them being a speedboat bed, which retracts to the ceiling by pulling a rope.

Also Read: 20 Treehouse Hotels You Wish You Could Live In

This houseboat community in West Sussex has a rich history of its own, which dates back to the 1920s. Hamish, an integral part of that history now, is an elderly man, but he is as good as anyone in building houseboats from scrap materials, setting a fine example for the green building industry.

Hamish also offers one of his Dodge houseboats for rent through Airbnb. It comprises a restored lifeboat hull mounted in the back of a Dodge fire engine. The houseboat has a living room with fireplace, kitchen, bathroom and two bedrooms to sleep up to five people. A night at the Dodge is worth £56 (~$74).

Check out the full video on Hamish’s houseboats on Great Big Story.