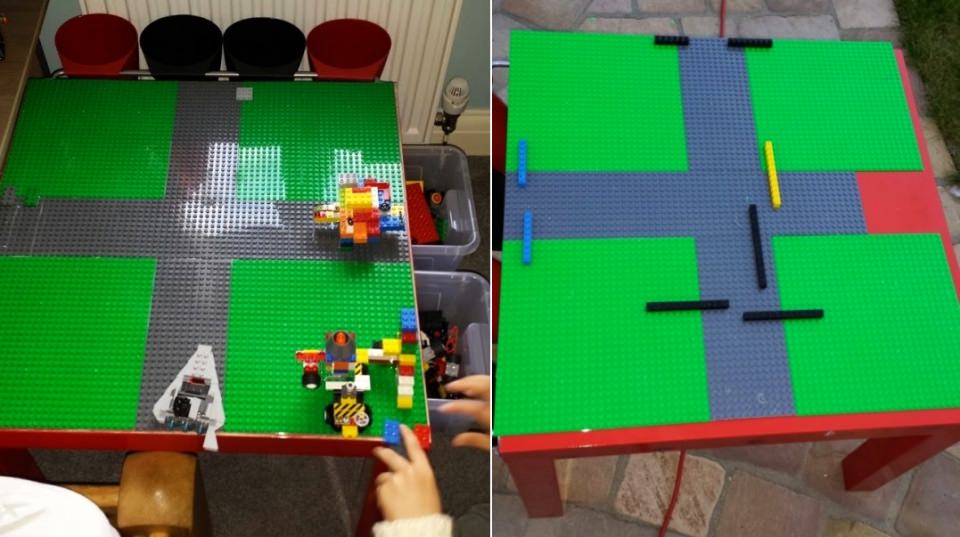 Recently, one Ikea hacker has beautifully merged functional decor and iconic toy building blocks together in the form of artisan DIY Ikea Lack Lego table. The eye-catching furniture piece is made from Ikea’s popular range of furniture, along with sculptural tabletop designed using green and gray Lego bricks.

After arranging the boxes, these are fixed beneath the wooden tabletop using screws and other required tools. Then, table legs are attached firmly to support the structure. Next part is to cut the Lego base plates as per your desired pattern. The designer wanted to give a road effect in the middle of the table, so this took quite a lot of cutting. Later, green and gray Lego blocks are attached to the specific sections.

Using these simple objects and following a few simple steps, the aesthetically functional piece of furniture has been created. It would certainly be an idyllic table for any kid’s room, where they can store their playful Lego blocks without spreading them onto the floor.

Ikea and Lego are two of the most recognizable brands in the world and together form useful life-sized items. Even you can create this identical DIY Lego table for your kid’s room or just to relive your childhood memories.

You can follow the step-by-step instruction by the Ikea hacker to redesign this practical Ikea Lego table. If you manage to redesign this brilliant piece of DIY furniture, do share your creation with us.