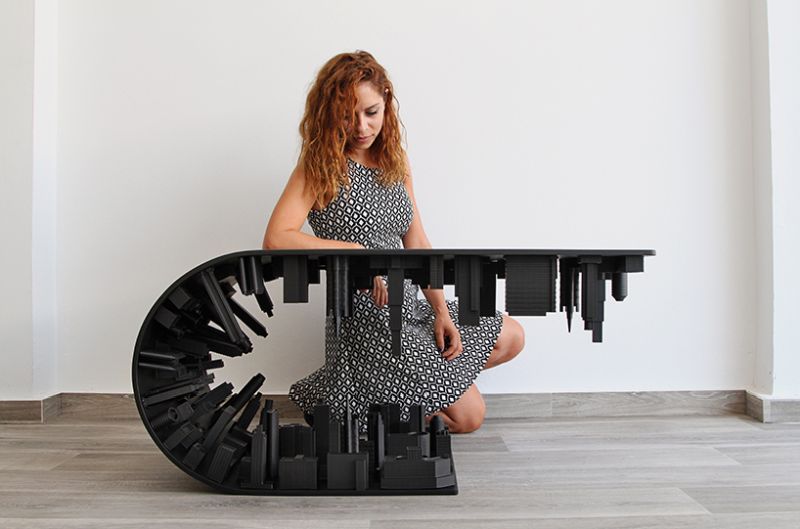 Remember the Inception-inspired Wave City Coffee Table by the designer Stelios Mousarris? Now the talented Cyprus-based designer is back with the matte black version of the same mind-bending furniture series. This latest re-edition boasts a striking contrast between light and dark, highlighting the theme of “good v/s evil” through a piece of furniture.

If you get closer to the all-black matte coffee table, you’ll find it quite similar to the old film noir movements of the ‘40s and ‘50s – based on a city with high criminal activities. Influenced by the dark theme of the old movies, filled with cigarette-smoking detectives and suspects, the black Wave City table also plays around ‘neo-noir’ atmosphere.

Nonetheless, we cannot forget that it is the successor of the original Wave City series – a mind-boggling furniture piece that’s based on the manipulation featured in the Leonardo DiCaprio starred hit film ‘Inception’. For those who live under the rock, let us throw a light on the previous collection of the coffee table, which was made from wood, steel, and 3D printing technology.

The interesting furniture lineup illustrates an upside-down city scattered with skyscrapers that seem to be floating in mid-air. Highlighting urban sidewalk with upside-down buildings the coffee table elegantly folds back onto itself in a continuous curve.

Following the same design theme, Mousarris has now brought a sleek and sophisticated addition to the series with its black Wave City Table that’s available for €6,500 (approx. $7,260).