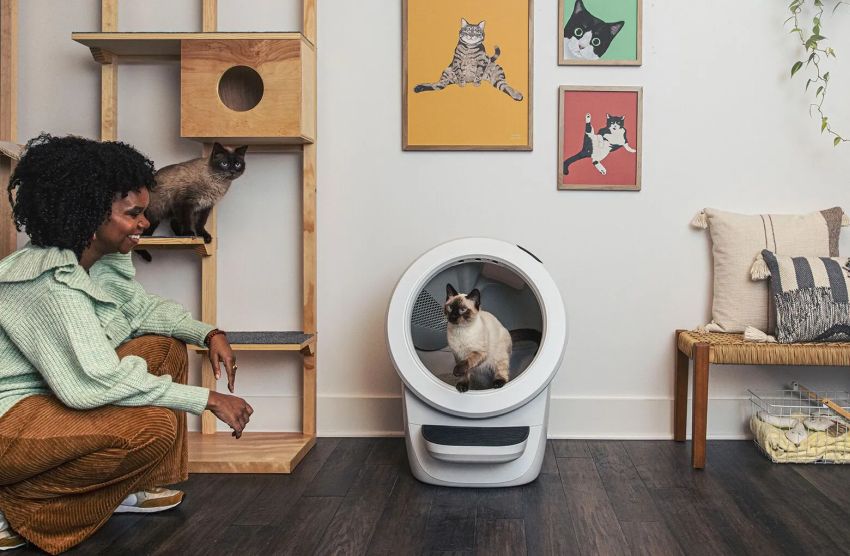 I’ve said it before, and I’ll say it again, cats are the connoisseur of comfort. They lower our stress, keep us entertained, and liven up our homes. Conversely, felines are moody, manipulative, and leave a lot of mess behind. It may be a regular practice for some of you to pick cat waste, but for those who don’t like indulging in the act, Litter-Robot 4 may come in handy.

Litter-Robot 4 is a self-cleaning litter box introduced by Whisker, a company that has been creating litter boxes since 1999. Like its previous iterations, the Litter-Robot 4 has a design of a space-age dome box and features a bottom chamber that collects cat waste.

The smart litter box boasts a number of other features but nothing beats the patented advanced litter-sifting technology that would prevent you from the hassle of scooping cat scat. Boasting features like enhanced odor control, cat safety, and real-time tracking of waste and litter levels through the Whisker app, this litter box could pose a real challenge to Pluto Square by HS2 Studio, which is one of the finest self-cleaning cat litter boxes out there.

As reviewed by Daily Beast, the litter box is embedded with sensors that detect when your cat has defecated. Minutes later, the machine cycles the feces and shifts it to the bottom chamber waste compartment. There is a lot of debate surrounding whether cats like to cover their waste or keep it open. My subtle observation is old wild cats or street cats like putting some sand or mud over their feces to keep their presence unknown to other predators. On contrary, a domesticated cat would gloat her scat as a mark of her territory. Well, cats are bossy, and we can’t help but clean the room to make it waste and odor-free.

This is why we need something like Litter-Robot 4 which also features a built-in optimal OdorTrap system that will be of great assistance in odor neutralization. Thanks to the tightly-sealed waste drawer that eliminates stubborn litter box odors. In addition, pet parents can do real-time monitoring of the cat litter when they are away.

The innovative software tracks litter and waste in real-time and sends information to the user’s phone via the Whisker app. Capable of accommodating four cats, the litter box is whisker-quiet when compared to its previous iteration and easily blends with your home interior. Available for $649, this compact litter box can be ordered from Litter-Robot‘s official website.