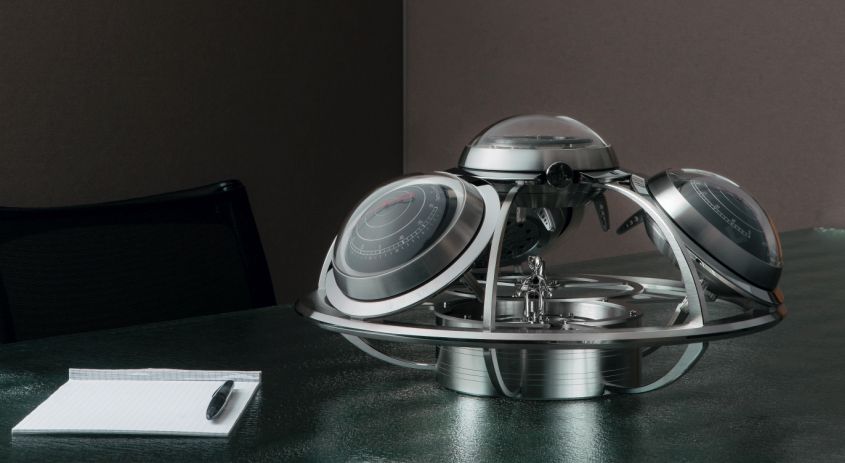 MB&F has created its niche in the wide market scope of timepieces with some jaw-dropping creations in the past. Lately, their accomplice has been L’Epée 1839 to create otherworldly clock designs, and yet again the duo has come up with something completely unique and worth drooling over.

Folks, this is The Fifth Element desk clock which is fused with the essence of a weather station. The unique timepiece combines the contemporary features of a horological machine with the functionality of a barometer, hygrometer and thermometer. Shaped like a futuristic spaceship, this desk clock has a concealed alien named Ross sitting at the base which is the actual “The Fifth Element.”

This stunning creation is the result of Maximilian Büsser’s craving for desktop weather stations popular in the last century. Since he was not able to find a good vintage model for himself, Max decided to make one himself. That’s how this horological weather station came into being.

He discussed the idea with Stefano Panterotto (then intern-designer), and they decided to give it the shape of a classic UFO inspired from comics of the 1950s.

Then the team got together to research the design elements of weather stations from the last 100 years. Also, they closely monitored the concepts of transparency, biomorphism and swarm in insect world.

All the four functions – clock, barometer, hygrometer and thermometer are fused into one – the fifth element is the timepiece. It houses all the elements in pods which create an archetypical UFO-like shape.

The challenge was to keep all the mechanical parts visible which the team managed to accomplish in the final prototype.

After the finalization of design elements, it was up to L’Epée 1839 to materialize what was on paper. Thanks to their expert clock designing skill, all four elements are detachable and interchangeable.