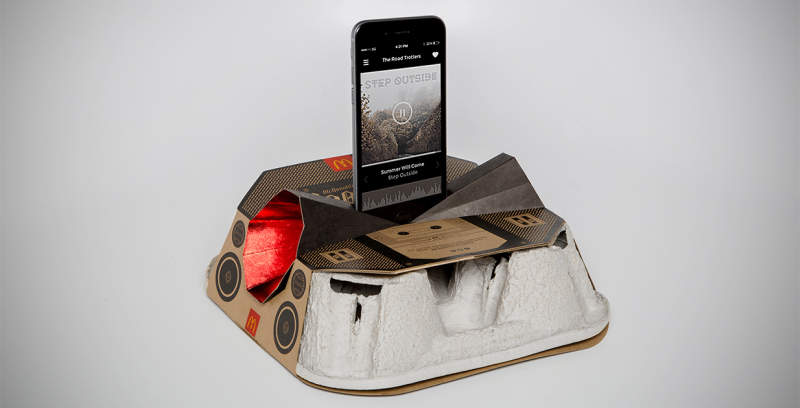 American fast food restaurant chain McDonald’s is always in the limelight for creating unusual things. From meal-assisting tool called Frork to 3D-printed straw; all such items are part of its strategy to attract and retain the customers. Once again, the company is seeking attention by creating sound-amplifying smartphone speaker dock that is made using salvaged cardboard drink trays. After finishing the meal/drink, usually people throw away the cardboard trays, but McDonald’s Canada is trying to reuse them, and the result is McDonald’s Boombox, which will be available in limited quantities at the one-day event held at Toronto’s Woodbine Beach on July 28th.

For our team, the McDonald’s Boombox was a dream project that allowed us to infuse high tech engineering and theoretical acoustics into an everyday item, and on behalf of a great brand in McDonald’s we’re delighted with the result and hope that everyone who gets their hands on one has as much fun as we did in helping bring it to life.

McDonald’s has collaborated with the University of Waterloo’s Audio Research Group and industrial design company Stacklab, to turn its cardboard drink trays into smartphone speakers. Whether you are using it with iPhone or Android, this upcycled speaker dock amplifies your sound without using electricity.

It is designed to boosts a smartphone’s built-in volume by increasing sound pressure levels via the cardboard speaker enclosure. The speaker dock is foil-stamped and features double-cone polygon speakers that are meant to amplify the sound coming out of your device.

There is a special slot in the cardboard speaker dock to secure the smartphone and let users access their phone’s display. It is obvious that it won’t enhance the output as electronic speakers, but will surely increase the sound of your smartphone to some level.