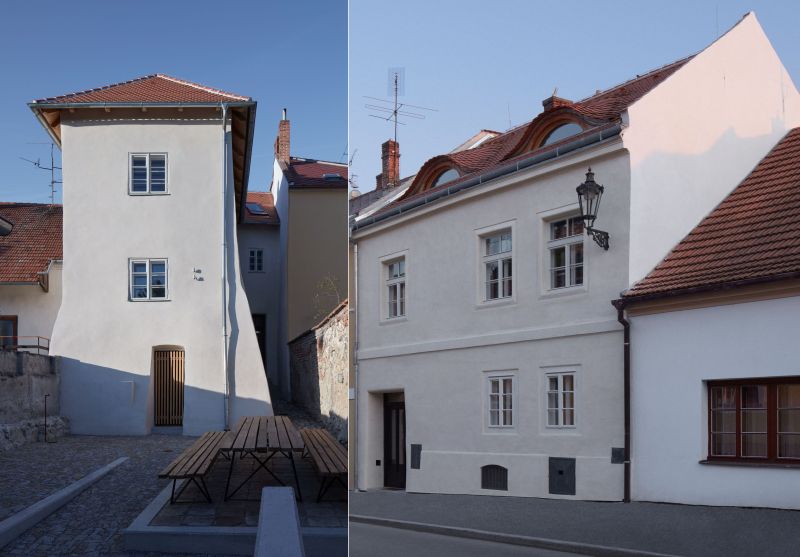 A house that is from the time of renaissance (in the 16th century) ought to have a lot of history related to it. Also, one cannot deny the amount of weathering it would have taken on all over those years. That’s what makes this renovated house turned into a guest house so special. Located at the foot of chateau hill, in the former Jewish quarter of Mikulov, Czech Republic, this medieval architecture retains its magic exquisitely.

Renovated by Ora architects for their client Petr štajner, the guest house is draped in fancy interiors, promising a comfortable stay. Since the house was made in the yesteryear when not much attention was paid to aligned design of walls or the rectangular openings, the design team had to tinker a lot with the incorporated elements.

The client commissioned Ora to reinvent only the interiors, but eventually the design team found out that exteriors also had to be clad in the new look as there were no defining lines between the interior and exterior. That’s because the spaces and shapes blend together to create and indivisible architecture.

In the end, this guest house is a perfect amalgamation of the old and new. There are modern bath fittings, space-saving furniture pieces and design elements which make it a luring property to stay in. And most importantly, there are wine cellars too in the basement of the house which goes under the ground level.

It will be primarily used as a guest house, but the owner has also made it a point to reserve one section of the house as a private flat.