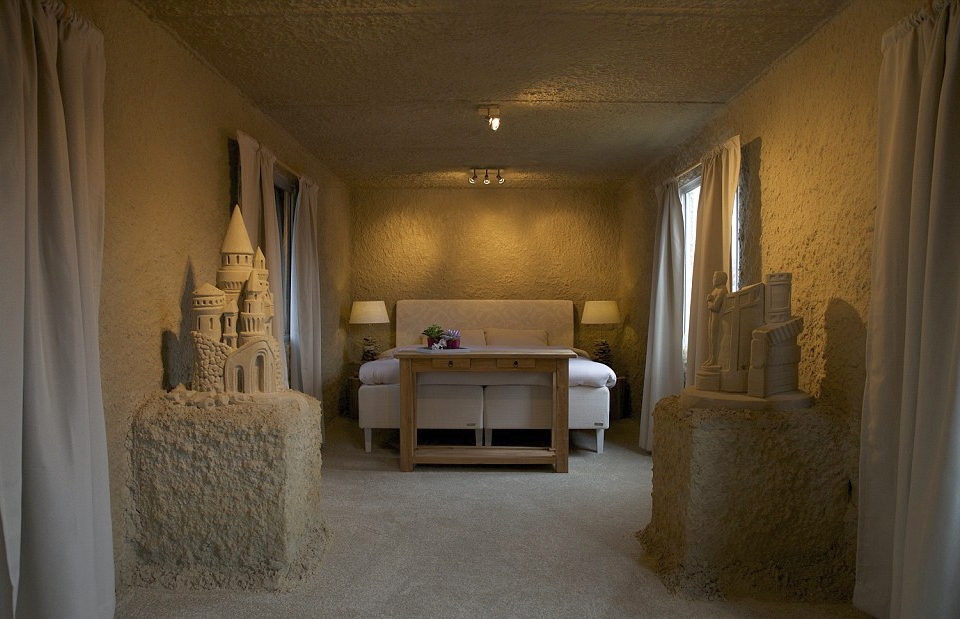 While going on vacations do not waste time building sand castles on beaches but spend a night in fully functional sand hotel. The Zand Hotel, located in Netherlands, is the world’s first sand hotel operating in two particular locations. The temporarily built sand hotel is actually a part of annual sand sculpture festival in the Frisian town of Sneek and the Brabant Oss.

Zand Hotel is created by Grand PowWow, the organization behind the great event. Currently, there are two sand hotels operating in the nation hidden inside eight-meter-high sand sculptures. One is modeled in form of the Flintstones in Bedrock, while the other one in Oss is decorated with dragons, the Great Wall of China and the Terracotta Army. Inspired by ice hotels in Sweden and Finland, the hotel took four weeks to complete.

The whole structure is made of thin walls, covered with sand, whereas the shower and bathroom is made from traditional materials. The fully furnished rooms are provided with running water, electricity, windows and carvings.  Priced for €150 a night (approx. $170), one-night stay includes breakfast, a bottle of Prosecco, Wi-Fi and personal tour of Brabant or Friesland festival grounds.

Both the hotels, that are just temporary fixtures, are currently booked for this year and will close their doors as the sand festival ends, but have plans to reopen in 2016 after receiving huge positive response from customers.