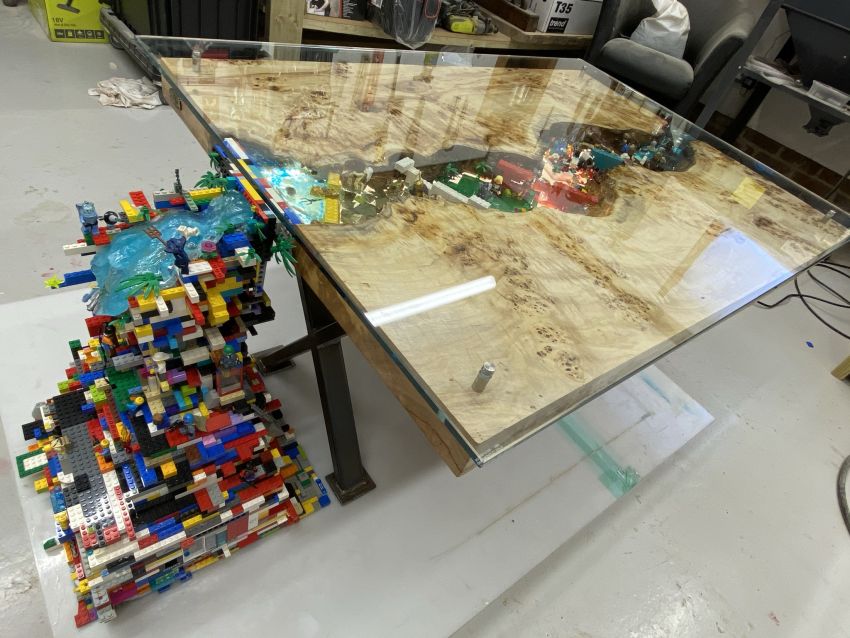 New Zealand-based designer and creator Nick Zammeti makes outworldly art from wood and resin using woodturning techniques. For his most recent projects, he took on the challenge of building a Flowing Waterfall LEGO river table and the final result is no short of breathtaking. He has used 10,000 LEGO bricks, resin and wood to make this awesome river table.

The project began with setting up various LEGO scenes between two live edge wood planks. These include characters from Star Wars as well as Captain America, Thor, Iron Man and Batman and Robin, which are prominently featured on the tabletop. Then, resin is poured cautiously all over the scenes to ensure stability.

The LEGO scenes continue down to the floor, with resin flowing over them to resemble a  waterfall. The resin waterfall adds a charismatic touch to the table. Just before the waterfall is the Aqua man scene where he is breaking the wall – of course through his magical water power (waterfall). The LEGO waterfall has a dedicated spot for a TV screen – a quirky feature indeed.

Lights are also added to the tabletop to make it even more captivating in the dark. The LEGO river table is finally completed with X-shaped legs. The attention to detail and LEGO scenes are really appreciative. The table can be a unique centerpiece at home or in the office of a LEGO fan. Nick has listed the table for purchase on his website with a price tag of about $2,687.