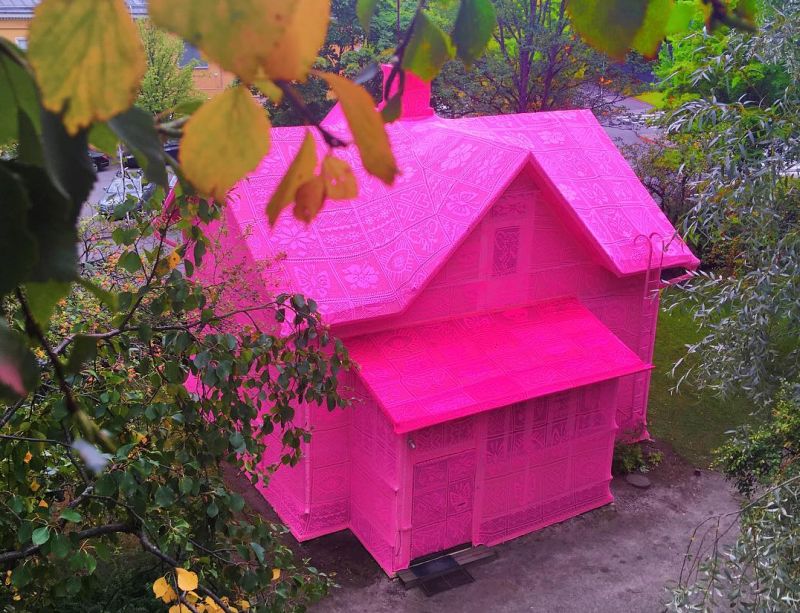 The world is full of people who inspire and motivate mankind to love and respect each other irrespective of their color, cast or religion. One such example is of the crochet artist; Olek, who yarn-bombed an entire house in Kereva, Finland in pink yarn. She worked with refugee women from Syria and Ukraine to cover the house in pink-colored yarn to bring social focus on the current situation of the refugees.

The overall structure of the house, including its roof and chimney is also covered with stitched pieces of pink crocheted fabric. A number of flowers and skulls are apparent in this crochet yarnwork by Olek. The pink house inspires common people to treat refugees like a part of the community, and help them make a bright future. The artist wants us to feel the dreadful situation of war-affected areas and pain of its residents who have to leave their houses.

Olek has been yarn-bombing and surprising people with her crocheted work for many years. In 2013, she yarn-bombed a car and a bike too. Another great project that caught everyone’s attention is the crocheted Wall Street Bull in 2010.

She is regularly working and inspiring people from her work. Her most recent yarn artwork, the crocheted house is a way to instill a ray of hope in the hearts of thousands of war-displaced refugees across the world.