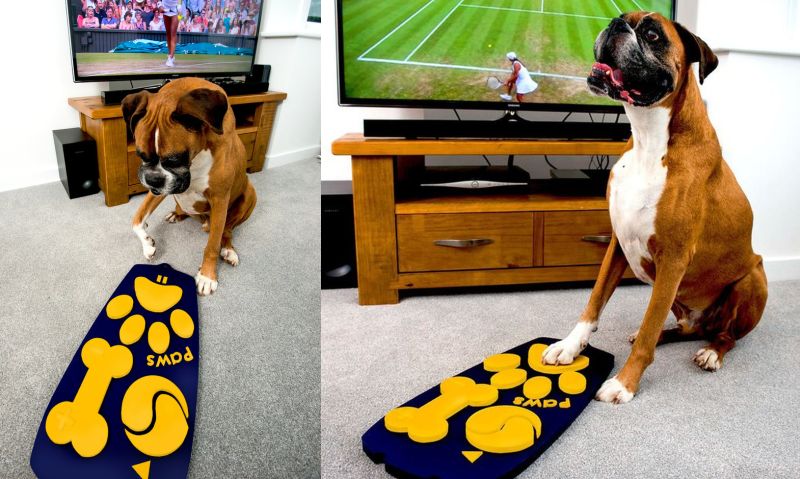 You don’t ever have to feel guilty again of leaving your pooch alone at home. The world’s first ever dog-friendly TV remote is here to keep them entertained in your absence. This one-of-a-kind remote has been developed by pet food brand Wagg in collaboration with Ilyena Hirskyj-Douglas, PhD Researcher in Animal Computer Interaction Design at the University of Central Lancashire.

The paw-friendly remote features extra-large buttons for clumsy paws, allowing your pooches to surf channels and watch their favorite TV shows when you are not home. Even the color of the remote is purposely chosen to be blue and yellow. This because dogs have very receptive eyesight for blue and yellow colors as compare to other color combinations like red and green. So, there won’t be any confusion in their mind while surfing various channels on television.

In addition, the TV remote for dogs also includes squeak sounds to produce a lower-intense frequency that appeal to dogs. Plus, it is attached with a rope toy that allows your four-legged friend to easily carry and play with the remote.

However, the paw-friendly TV remote is still a prototype and developers are closely monitoring Rover’s reactions to the buttons, sounds and colors. After thorough analysis, Wagg hopes to approach top tech companies to put their prototype into production phase.

This colorful remote for dogs has been created by Wagg to mark the launch of Dogglebox, a one-off spoof that’s created for YouTube with a completely canine cast. Soon your adorable canines will be turned into lazy couch potatoes.

From human perspective it may seem to be an entertaining and playful product for dogs. But the man’s best friend only need pampering and attention, rather than some materialistic toys.