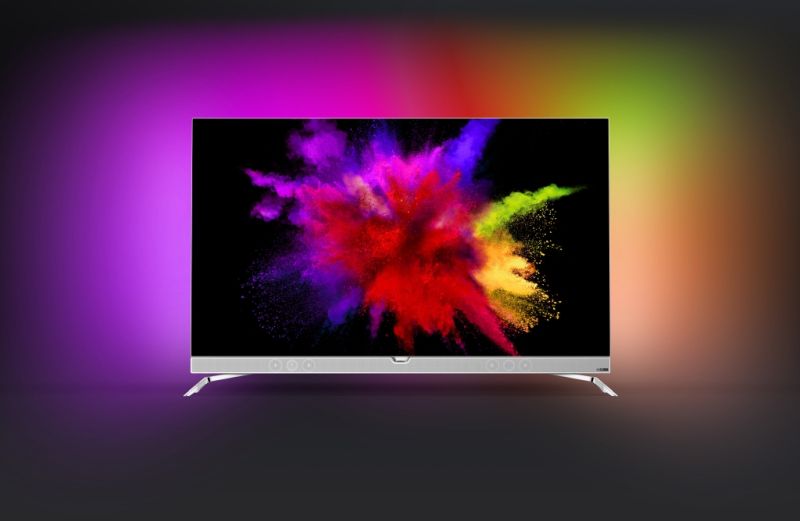 At IFA 2016, Philips has unveiled its first 901F 55-inch OLED TV with built-in ambient lights called “Ambilight”. The Ambilight feature can illuminate the area around the TV to create more immersive TV viewing experience. The light strips are present on the sides and top of the TV to mirror the colors on screen.

This means if a shot of blue sky or green grass is shown on a TV screen, the same color will be reflected on your walls for some realistic effect. For some, it might be too flashy, but according to the company, it’s going to improve the television viewing experience.

Besides that, the OLED TV has got plenty of impressive features including 4K resolution, built-in soundbar, high dynamic range imaging (HDR), and Android-powered quad-core processor. Now LG is surely going to get some OLED TV competition from Philips’ first set.

The television has also got Perfect Pixel Ultra HD engine that’s able to process nearly four billion pixels for self-adjusting brightness and sharpness. This will definitely create excellent picture quality. In case the content isn’t in 4K resolution, it will be automatically upscaled to match your TV’s capabilities.

Philips’ OLED TV also comes with a 17-bit color booster, intelligent color processing, and the maker’s Perfect Natural motion technology. So, the company has really worked hard on improving your viewing experience. However, there is no word on its pricing and availability so far. But you can catch the Philips’ 901F television at IFA 2016 trade show in Berlin.