Relive the Magic of Hogwarts with Harry Potter-Themed Luxury Apartment 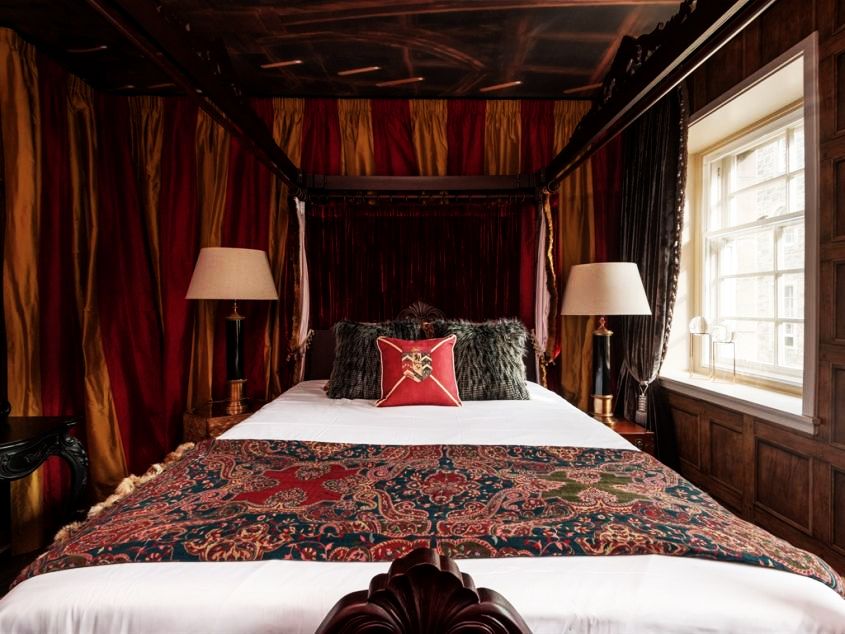 Welcome Wizards! It’s time to unlock the doors for a perfect weekend break with Harry Potter-themed holiday apartment in Edinburgh- the birthplace of J.K Rowling’s books, and the city which motivated her to write the series.

This luxury flat is the brainchild of Yue Gao (Harry Potter’s biggest fan), and it literally takes you into the magical Harry Potter’s world. Overlooking the Royal Mile, The mystical apartment is nuanced, and gives you a feel that you’re at the Hogwarts. The flat is full of Harry Potter-themed accessories which makes it a wonderful place to stay midst Edinburgh.

Canongate luxury apartment comes with a master bedroom, having a Gryffindor dormitory theme, with custom hanging red-and-gold curtains. The second bedroom is a perfect gig, inspired by the Hogwarts express. The living area closely connects with Gryffindor common room, wherein you can play chess and enjoy being a wizard. Each door in the flat is highlighted in the Hogwarts house’s patent colors. The luxurious flat also includes special pieces of furniture, which once belonged to J.K. Rowling, making it a unique selling point of the apartment.

If this isn’t enough for the potter’s fans, the lavish accommodation also includes a fully stocked kitchen, much of which are inspired from “Harry Potter” books and films. The kitchen comprises washer-dryer, refrigerator, microwave, kettle, toaster, nespresso coffee machine, electric-gas ovens and basic kitchen utensils. Whereas the beautiful bathroom comes with basic amenities like: drench showerhead, complimentary toiletries, a shower cap, vanity kit and a sewing kit.

Having all the elements that transcend you to the Harry Potter’s world (apart from the master bedroom, kitchen and bathroom), the one that personally moves you are the hallways. With wallpapers covered in framed portraits and photos, it reminds you of similar moving pictures on the walls at Hogwarts, creating an enchanting aura around you.
It took seven months for Yue Gao, to build her magical flat. She traveled to various places around the world to gather some of the exquisite items in the property.

So, if you’re a die-hard Harry Potter fan, and wish to revive the magic of the series, pack your bags and enter into the mythical world of magic, with this holiday apartment in Edinburgh. The luxury accommodation is open all year around for its fans, and is available for rent at approximately $213 USD (approx. £154), a night (Price varies depending on what time of year you book).

A Gypsy soul, Veeni started her career as a writer four years back and feels it's never too late to be an avid learner. Following her passion for writing, her journey includes hardwork, passion, and to be fearless in the pursuit of what puts her heart on fire.