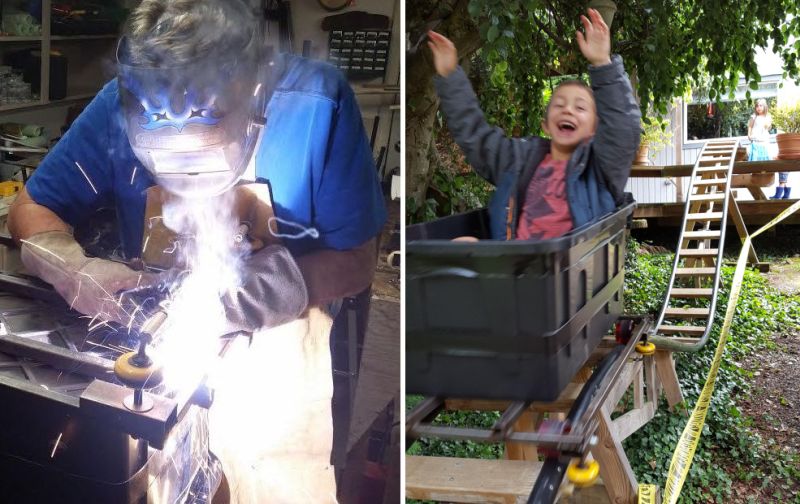 Paul Gregg, a retired aerospace engineer from Utah, had created a thrilling roller coaster park for his six grandchildren. Using this sharp engineering skills, he has managed to design and build not only one but three cool roller coasters in his own backyard.

The first ride is dubbed ‘Out’n’Back Negative-G.’ It starts from the top of a picnic table that’s placed on his porch, and speeds over a series of bumps and dips. It further climbs up a large slope and retracts the course backward.

Another ride is named ‘Smaug the Terrible,’ after the character from The Hobbit. This one barrels its way through the backyard and crosses between the trees and also loops under itself. Likewise, the third coaster also adds up to the thrill.

He has constructed all three coasters using the same processes he used when he worked on airplanes and military vehicles at Boeing. However, the materials he used for this DIY project are a bit of a step down from the high-end alloys. For the roller coaster, he has used few lengths of timber and PVC pipes.

In a post on Reddit, Gregg has described how he designed each coaster using CAD schematics, along with calculated velocity, kinetic energy, and G-forces for each twist and turn. Before beginning the construction, he designed everything on spreadsheets and the accelerometer in his phone.

He also carried out several safety tests with sandbags strapped to an infant car seat, before finally letting his grandson ride. The resulting coasters are as amazing as the rides you usually find in amusement parks. But sadly, Gregg only recommends his coasters only for the riders aged five to nine.

Check out the video below to see the roller coasters in action. Find out more details about the DIY project on Imgur.