Turn your old skateboards into a colorful coffee table 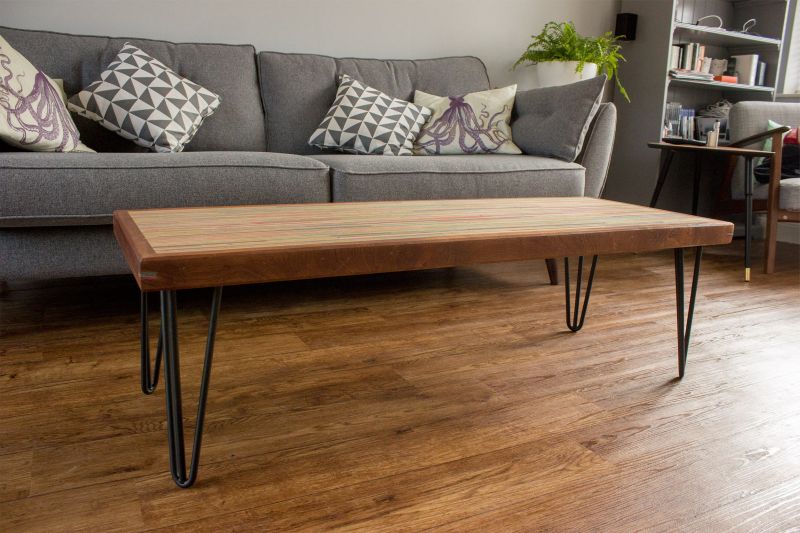 Everybody has some type of creativity hidden within them. Sometimes the idea in your mind turns into something unique and useful. Just Like, Scalamere, a DIY enthusiast who has made a colorful coffee table from the unused and old skateboards. He collected multi-colored old skateboards, glued fixed-size strips of board to create two large blocks, and finally joined them together to give a shape of stunning coffee tabletop.

This beautiful creation started with a blueprint of the design. Initially, 20 multi-colored skateboards were taken and roughly cut into 2 inch strips. Edges of the strips were sanded to give them a fresh look. Then different-colored strips were glued together to present a fantastic look.

At first, the strips were glued together wrongly, so this resulted in sloping blocks. Lastly, the glued strips were clamped between two large pieces of timber to keep them flat. Every portion of the glued-strips was also kept clamped equally to hold them together.

The idea of sandwiching the strips between two timber-blocks worked great, and finally two wooden-lengths were made by gluing the strips. These wooden-lengths were straightened off by wood planer, and the remaining gaps were filled with sawdust. Thereafter, glue and wooden miter-joints were used to bond them together in one large block. The final block was kept flat by clamping and keeping extra pressure on the two blocks, same as the previously done.

After the glue dried, remaining gaps were filled, and the final block was squared up to give it a tabletop shape. Final sanding process of the block made it look more beautiful. The block was framed with hardwood connected through visible miter-joints, nail gun and glue. Wood-finishing was done through Danish stain to bring out natural colors of the plywood. Now, the block actually looked like a coffee table.

The visible miter-joints on edges and Danish stain gave it better looks. Then Scalamere attached the metal legs to bring the coffee table to life. However, he hasn’t explained how the legs were made and attached to the table. If he would have provided more details, then it would be easy for all of those who want to make this colorful coffee table.