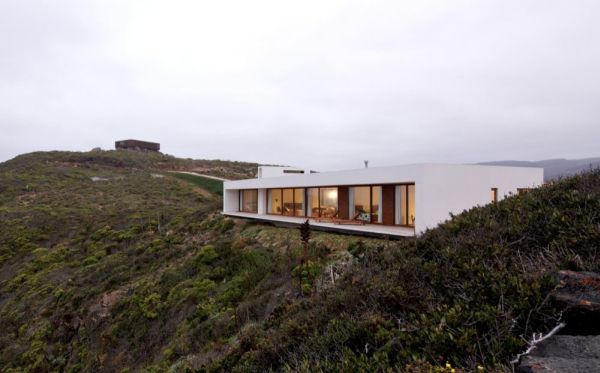 Previously we talked about the beauty of La Perla Del Mediterráneo located in Alicante, Spain overlooking the Mediterranean Sea. This time we are discussing another breathtaking architecture situated atop rocky Chilean coastline in Tunquen overlooking the Pacific Ocean. Dubbed Tunquen House, it is designed by Nicolás Lipthay Allen of L2C architecture studio. It’s a single story home made exclusively in white concrete with self-sustaining features. The cliff house generates its own energy and deals effortlessly with waste it produces.

The gorgeous white house built on a cliff overlooking the sea has a design influenced largely by the gushing winds. The home divided into three different areas – the main central area comprises of a spacious living room, a kitchen, and a dining room, while the master bedroom with bathroom is located on one side and children’s room and the guest room is located on the other side of the central area.

Interestingly, the Tunquen House has a sheltered courtyard built outside the living room. The courtyard provides the house with an area for garden and occasional outdoor dining. On the rear side of the living room, the house has floor-to-ceiling sliding glass doors, which offer a jaw-dropping view of the blue ocean below. A long deck has been built to span the length of the house which ingenious merges the indoors of the Tunquen House with its exteriors.