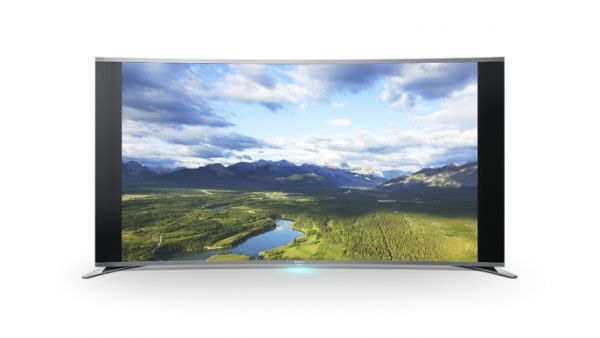 Back in January during our CES coverage, we talked about the curved screen LED TV ‘race’ between electronic giants around the world. And, now it seems Sony has emerged as the winner by the unveiling the world’s first curved screen LED television, christened modestly as the model KDL-65S990A. Retailing at around $4,000, the TV certainly has it all – starting from Sony’s indigenous TRILUMINOS Display color system, X-Reality PRO picture engine to the state-of-the-art 4-channel Multi-angle surround sound system to complement the home theater.

Of course, the primary feature of the KDL-65S990A is obviously its curved screen credentials.  According to Mike Lucas, senior vice president of Sony Electronics Home Entertainment & Sound division –

Sony has a storied history of innovation, particularly in the television category. The gentle curve of this television borrows from the screen technology found in movie theaters, and provides an immersive experience that makes viewers feel as if they are truly part of the action and in the moment of the scene they are watching.

Other features of the KDL-65S990A include the aforementioned TRILUMINOS Display color system, which is Sony’s proprietary technology. According to the company, this attribute allows the TV to display natural shades of colors in all their vibrant glory with richer hues and tints. X-Reality PRO picture engine, on the other hand, endows more details on the screen when playing on any media (Blue-Ray disc or satellite TV).

Finally, the KDL-65S990A has something for us net junkies too. Sony has integrated their Smart Connect, which improves upon the connectivity between Bravia TVs and mobile devices. The scope is further accompanied by apps like TV SideView that helps users to browse the net (and share media files) via the large television screen.