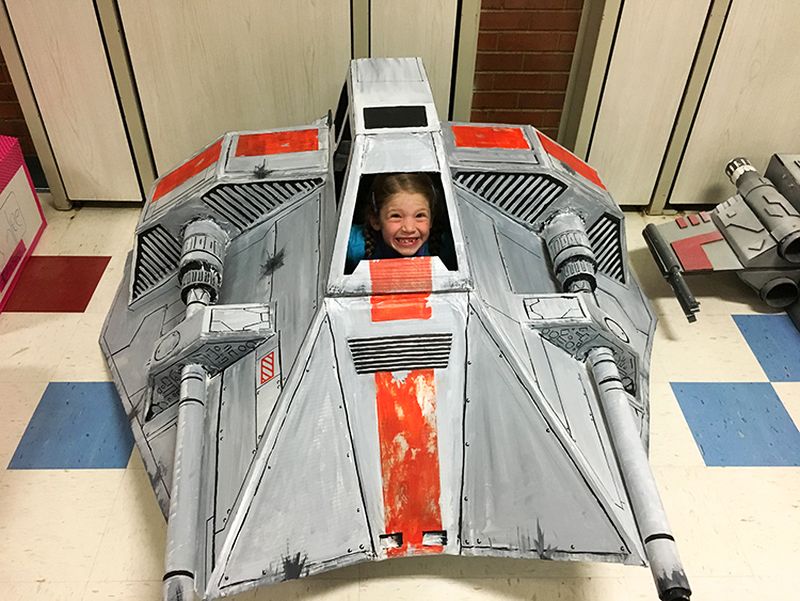 Attending an event at school seems so much fun if you have the Star Wars-inspired Cardboard Snowspeeder to sit in. Created by Redditor PoorKidstoys for his six-year-old daughter, this sci-fi-themed vehicle is a spectacular example of functional geekiness.

The Cardboard Snowspeeder was made so that his daughter could sit in it during her school’s annual “drive-in” movie day. During this event, families haul in geeky vehicles and spaceships for an outdoor screening on the final day before classes let out for the summer. The snowspeeder was inspired by their brother’s cardboard X-wing that he built for his son’s movie day event a few years ago.

To create this amazing Star Wars Snowspeeder, he used a collection of old refrigerator boxes, Cuisinart containers and scrap pieces of cardboard. It was further assembled with lots of duct tape, glue and gummed tape. Cannons and air intakes were added to complete the detailing. Finally, his wife stepped in for the final paint and airbrushing applications.

Have a look at the finished project in the image below. You can also find out more about the paper spacecraft on Imgur.