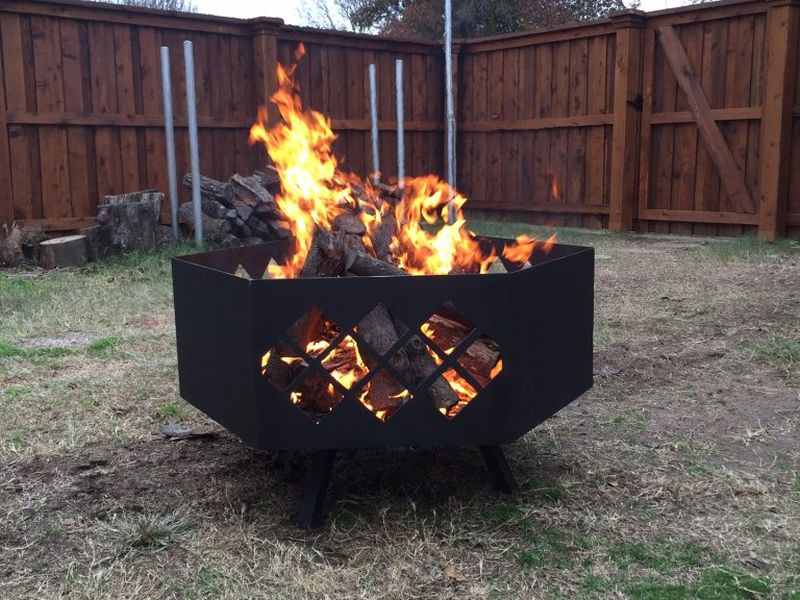 A Texan girl April Wilkerson utilizes her spare time in crafting useful things for her home. Earlier, she didn’t know anything about building, although after extensive work for years now she works on various DIY projects and shares their tutorials on her blog. Recently, she made a custom steel fire pit and shared its demonstration video on her YouTube channel. She searched online for getting some inspiration, and finally decided to build a hexagon-shaped fire pit with strong steel legs.

Primarily, she used a plasma cutter, welding cart, angle grinder, magnets and a large compass to make a patterned fire pit out of steel plates. If you also want to make a similar fire pit for your backyard, you can follow the steps listed below.

For fabricating this DIY fire pit, one needs to get an appropriate metal cutter and a nice method for clamping the metal sides together. Another crucial task is cutting patterns in metal plates, and once completed, it will serve as a useful and functional household item for surviving harsh winters.

Related Posts
These Homemade Dog Costumes for Halloween Will Leave You in Awe
By Monika ThakurOctober 6, 2022
Wood-Fired Hot Tub: How it Works and Things to Consider Before Buying One
By Happy JastaOctober 6, 2022
Easy and Fun Popsicle Stick Crafts For Halloween
By Monika ThakurOctober 3, 2022
10 Easy Ways to Make Your Bedroom Look Luxurious
By Priya ChauhanOctober 1, 2022
Leave A Reply Cancel Reply