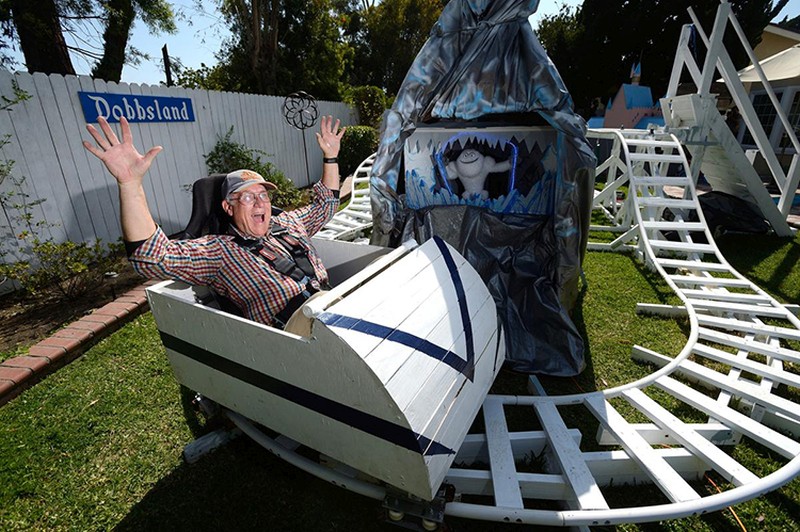 To get the adrenaline rush we all visit local theme parks to get on-board the most thrilling roller coasters. And the love for roller coaster will never die as new challenging coaster rides attract thrill seekers from across the globe. But, then, you know DIY’ers like to make their own things. In this case, it is about having a large backyard and the patience to craft a thrilling ride for the kids at home. Yes, we are talking about roller coasters made at home, and you can build them too.

Although they might not have the extreme G-forces you expect in a roller coaster that brings your heart to your mouth, but still, they are exciting enough. Just have a look at these DIY roller coasters, and the dream of having a thrilling ride in your own backyard is not that far-off.

Being old doesn’t mean that you can’t be creative. Paul Gregg, a retired aerospace engineer from Utah has built a roller coaster park for his six grandchildren. Taking advantage of his engineering prowess, the creative granddad created three roller coasters in his background, so that kids at home never have a dull weekend. He designed all these rides using CAD schematics while keeping in mind the speed, kinetic energy and the G-Forces exhibited on sharp turns. His rides are dubbed ‘Out’n’Back Negative-G’ and ‘Smaug the Terrible,’.

This 180-feet long roller coaster is built by 50-year old Will Pemble who is an e-commerce consultant. All the hard work for his children, and it paid off as the roller coaster turned out exactly as he wanted it to be. It cost him around $3500 to make this coaster, and you can also get a good idea of making one in your backyard too. The inspiration for making this roller coaster came when his son asked why they can’t make a roller coaster of their own after returning from a trip to Six Flags Great Adventure theme park in New Jersey.

Evan Boyes has a knack for building roller coasters, and this one is built in his backyard with help from his dad. There is not much information on how he made this roller coaster, but still, it has ample visual details to get an idea of how to make one for yourself.

Looks like Jeremy Reid likes his roller coasters, and that is why he built an imposing ride (won the Backyard Genius Awards) on a 10-acre plot at his parent’s backyard in the southwest of Oklahoma City. Being an engineering student, he set out on making this roller coaster ride for a duration of four years, spending $10,000 on it. Just like the other homemade roller coaster rides, this is also a one-seated coaster.

The ride goes around the track at a speed of 18 mph which has close turns and steep elevation sections. No doubt Jeremy makes it a point to maintain the coaster properly, and only friends and family are allowed on-board.

Bruceville, Indiana is well-known for its new attraction that apparently is built for his grandkids by John Ivers. This particular roller coaster built in Ivers backyard has a 360-degree loop which makes it an intimidating ride for locals as well as people who visit the place after it acclaimed internet glory. Ivers calls it the Blue Flash, simply because it is blue colored and it takes you on a ride which happens in a flash while you ride upside down after the first turn.

Back in 1989, a homemade roller coaster in Allentown, Pennsylvania gained attention because it was the first ever DIY ride which dropped from the top of the roof. Called as Termite, this roller coaster brings back nostalgic memories and you can also make one for yourself by looking at how it was designed. The drop and elevation of this brief ride are quite dramatic, and if you are also planning to make one in your backyard, you’ll get a good idea.

Steve Dobbs, a retired Boeing aerospace engineer who now teaches engineering in California State Polytechnic University in Pomona, has created his own version of mini Disneyland in his backyard. Inspired by amusement parks, mainly the Disneyland, 68-year-old grandpa has built a magical theme park called ‘Dobbsland’ for his lucky grandkids to enjoy whenever they want.

Dobbs’ miniature theme park has a mini roller coaster along with princesses, castles, trains, and tunnels similar to those in Disneyland Park. The roller coaster takes kids on a ride they queue-up to take turns-in and is the main attraction of their granddads’ creation.