This Renovated Airstream Trailer Houses a Family of Six 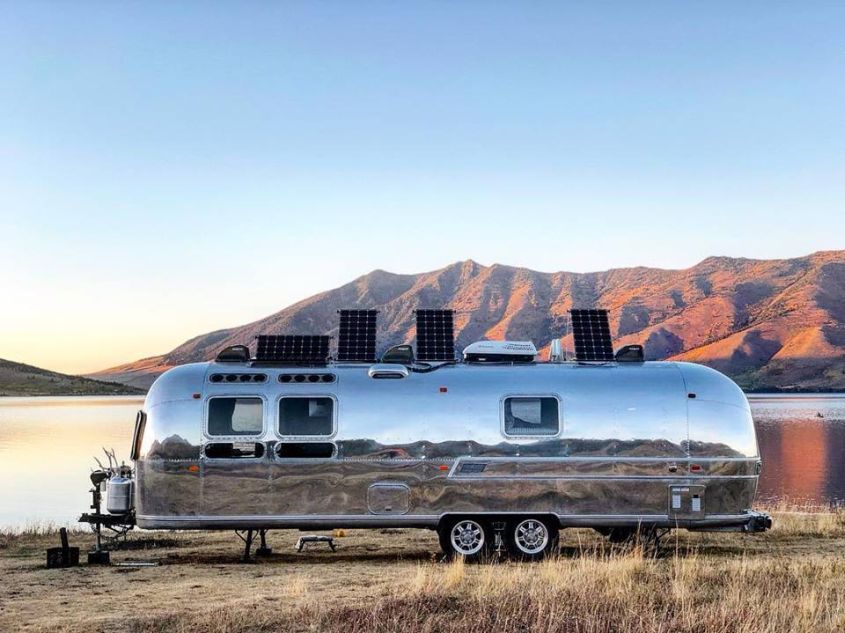 Jonathan Longnecker and his wife Ashley wanted to travel across the country, thus sold their four-bedroom home in April 2015 and bought an RV. They again traded off the RV for a 4WD truck and a 31′ Vintage 1972 Airstream Sovereign Land Yacht. They spent about six months renovating it to turn into the Tiny Shiny Home.

The 31-foot-long vintage conversion has fold-down bunk beds for kids, convertible seating, kitchen, solar panels, and composting toilet to comfortably camp in remote areas with minimal expenditure. They removed the end cap to provide more headspace in the seating area on one side. The seating has built-in drawers and space to store the lithium battery bank. A walnut table in the center can be joined with the seating to serve as a bed.

Next to the main entrance lies the kitchen area with Atwood stove/oven, sink, and a plenty of counter space. They raised height of the countertop in order to provide more storage space underneath and match with the fridge on the other side of the kitchen. There is a pull-down faucet in the kitchen that can rotate 180-degrees so that it can be used as an outdoor shower.

In the middle of the renovated Airstream trailer lies the kids’ room with dedicated bunk beds that could be folded down into couches during the day. Each bed is equipped with LED reading light, 120v plug and a 12-volt plug with USB insert to charge devices on the go. There is storage under the bunk bed as well as overhead shelves for kids to store toys, clothes and other stuff.

As for the bathroom, it is located at one end of the trailer. It has a basin sink, compost toilet, and a shower. The existing black tank is turned into a gray tank. The roof is decked with solar panels to support an off-grid living.

The family has traveled more than 100,000 miles in the mobile home and counting.

We are currently on a quest to explore the country, simplify our lives and give our kids unforgettable experiences instead of disposable things.

The Tiny Shiny Home allows the Longnecker family to travel wherever they want.