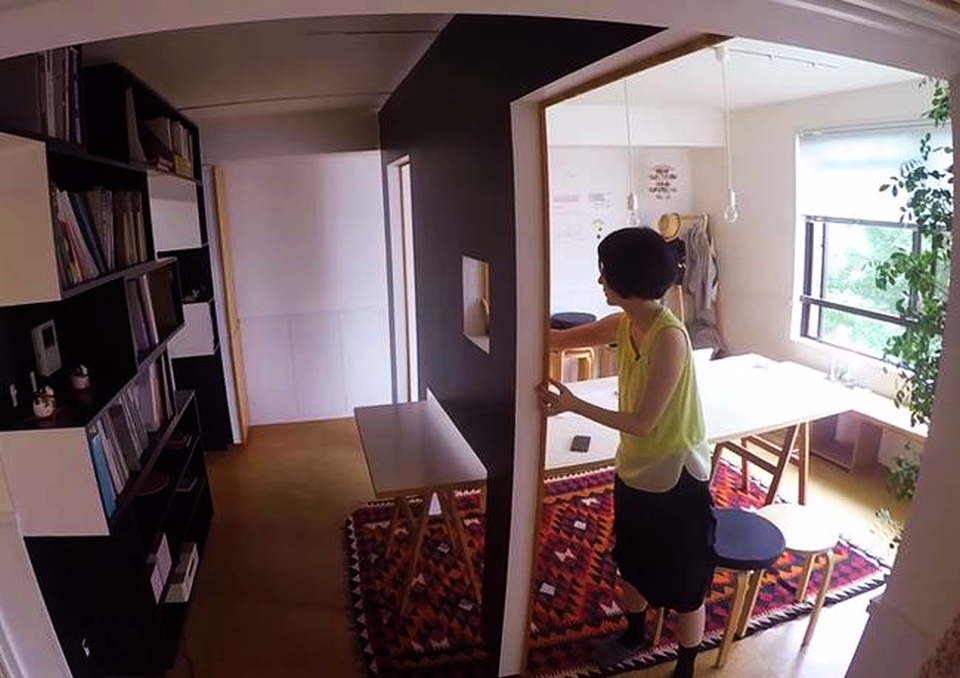 In order to avoid paying high Tokyo rents for office spaces, architect Yuko Shibata decided to utilize her small apartment as home office. But instead of renovating the whole house, she has created a clever moving wall system in order to separate the office space from home, maximizing the use of small spaces.

Inspired by fusuma (the sliding paper screens used to divide rooms in traditional Japanese homes), Shibata has managed to form ‘Switch’- a sliding bookshelf/wall that allows her to divide rooms to form spacious office as well as living space. The concept behind this creation is simple- you need extra space, so simply move the wall and you’re sorted.

The partition wall made from reinforced concrete weighs about 750 kilograms (1,450 pounds) and is placed on rollers that help it to move. So it can easily switch the main space from dining room into a meeting room with a separate library. On opening the study and bedroom space, one can see a hole in the wall that’s further installed with another mobile bookshelf wall.

This additional wall pivots out to create a two-room workspace/library plus a partitioned bedroom. This means the same room can be divided into office, bedroom and living area as per the specific needs of the owner. The reinvention in ‘Switch’ apartment costs about USD $7,000 without much changes to the existing structure. Probably, it’s best to invest in the morphing home/office wall than to spend money on equivalent rent for tiny office spaces.

Check out the video given below to find out more details.

Related Posts
These Sweet and Savory Halloween Pies Deserve a Place on Your Table
By Priya ChauhanAugust 9, 2022
Bathroom Fireplaces with Scintillating Style: A Fiery Design Trend
By Sameer KumarAugust 6, 2022
This Marble Plug Rolls on Your Sink and Spins Over Your Mind
By Atish SharmaJuly 29, 2022
Do it Yourself: How to Recaulk a Bathtub?
By Priya ChauhanJuly 26, 2022
Leave A Reply Cancel Reply