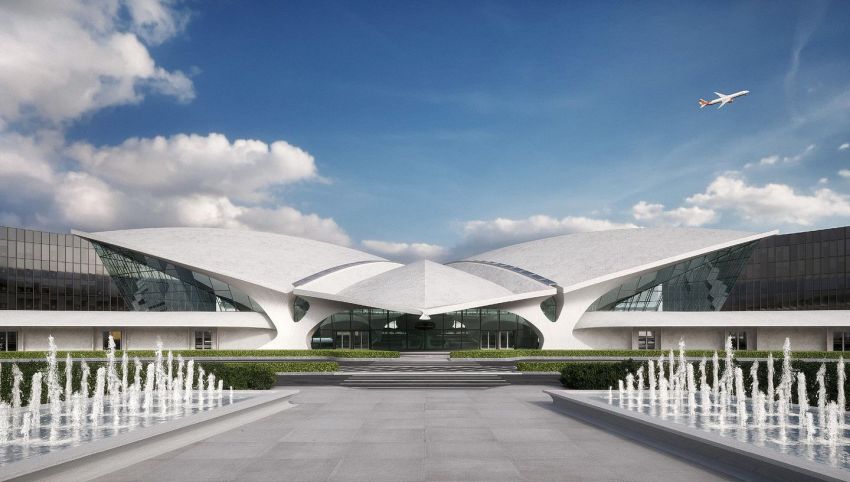 New York-based Morse Development in collaboration with MCR is re-developing the terminal as a LEED-certified hotel. Local architecture firm Beyer Blinder Belle is responsible for renovating the terminal, while Lubrano Ciavarra Architects is designing two new buildings. All the guestrooms designed by Stonehill Taylor will be accessible through flight tubes made famous by the 2002 film Catch Me If You Can.

They will feature 4½-inches thick glass walls by Fabbrica that will cancel runway noise while offering views of planes taking off and landing in JFK’s operational terminals. Each guestroom features a custom built wetbar, Hollywood-style bathroom, warm wood features, and modern furnishings.

There will be 45 event rooms and five hospitality suites to host up to 1,600 people. Inspired by Benjamin Moore’s 2018 Color of the Year, the TWA Lounge is carpeted in red and furnished with curved seating and other furniture pieces by Knoll – recipient of the 2018 NYCxDesign award for Sales Center design.

Since 2001, this iconic terminal has undergone many stages of construction to be used as a hotel, but it’ll be TWA that’ll actually make it possible.  TWA Hotel has begun taking reservations, while the official opening is slated for May 15, 2019.

We have featured a lot of unique hotels before, and this one with its distinguished sloping structure, curved windows, and classy interiors is surely in the top of that list.

Update: After a two-year $265-million restoration and renovation project, the TWA Hotel at JFK opened its doors for visitors on May 15. Each room starts at $249 per night, with a shorter 4-hour daytime stay rate for $140.