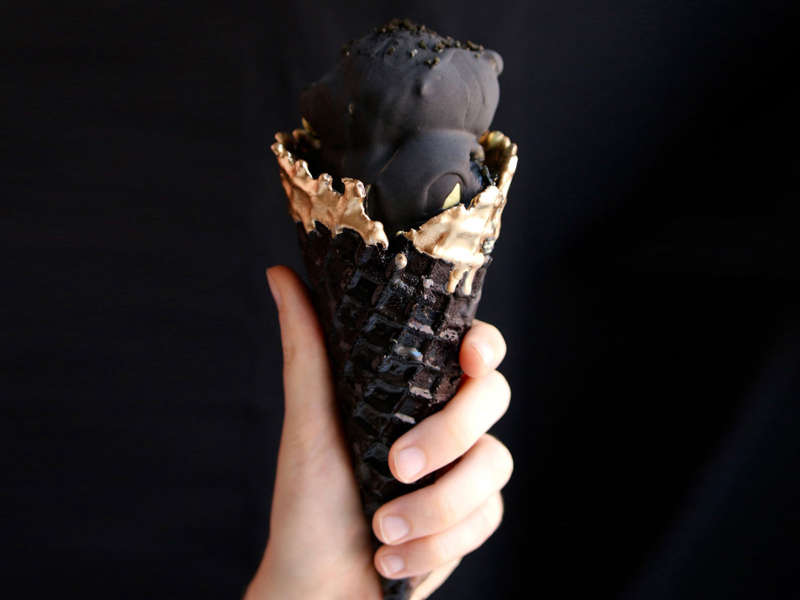 To witness, the total solar eclipse hope you’re already at Portland on August 21. While gazing a the rare celestial phenomenon, you can even enjoy this one-of-a-kind ice cream, called Eclipse Magic Cone This limited edition ice cream is being offered by Salt & Straw’s Wiz Bang Bar, which is well-known for its unique soft serve ice cream creations.

But to mark 2017 total solar eclipse celebration, they have created this otherworldly ice cream cone for the customers. It is a “black charcoal waffle cone” rimmed with edible gold, filled with spiced marshmallow fluff, golden yellow coconut, and turmeric soft serve ice cream, and further topped with a black sesame shell. It even has pop rocks on top that are supposed to look like craters.

Unlike the eclipse, this cone is available for five days, from August 17 to 21, at Wiz Bang Bar, located inside Pine Street Market. Describing the creation process of this magical cone, Straw ice cream maker Tyler Malek mentioned:

This behemoth of a celestial satellite into the path of the sun… affecting the lives of millions of Oregonians with a single drip of creativity and a single drop of astronomical chance. The sun will burst like liquid gold with any remaining power not snuffed out by our beautiful moon. The morning sky will create a black and yellow and blue canvas that will indulge our visual senses beyond compare. I’ve spent my entire life dreaming of visiting the moon, and the upcoming eclipse will give us an astronomical experience that pushes us to reconsider what magnificent life force exists in our solar system. I hope this ice cream merely helps your creative mind-space expand into the upcoming experience and helps push you to consider what exists, what doesn’t exist, and what might exist after totality.