Woman builds one heck of a cardboard palace for her cat 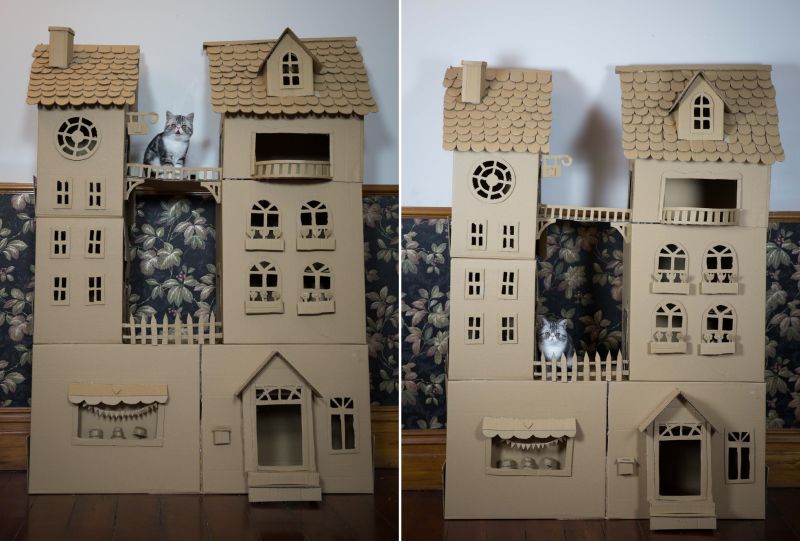 Taking cat devotion to whole new level, 26-year-old Frances Ratner from New Zealand has built an entire castle for her six-month-old kitten, Prince Peachblossom. On a rainy day when she had nothing to do, she decided to build a cat house for Mr. Peachblossom.

To fit the little cat’s name, Ratner couldn’t think of any other cat house but a beautiful palace made from cardboard. She had recently moved to a new house, so there was a plentiful supply of cardboard boxes at her place. It took over five hours to build the entire castle that has four stories and eight rooms. All the rooms are connected with tunnels and ramps, so the little feline can easily make his way to different rooms and the attic.

Wondering how the little Prince reacted after seeing his massive cat house? Ratner mentioned that her kitten liked it at first as he was curious to explore every room of his new palace. But his explorations only lasted for just about 10 minutes. Even though the kitten ignores this beautiful palace now, Ratner is happy that she did something for her adorable Prince. However, she has managed to capture the curiosity of the kitten in some adorable photographs.

Well, every cat owner knows that their cat never really appreciate what you do for them unless you get them food. But obviously the cat lovers don’t mind their feline’s fussy behavior – after all, all cat owners want to treat their furry friend like a prince or princess.

Check out Mr. Prince Peachblossom exploring his palace in the images below. You can also see his more photos on Instagram.

Related Posts
70+ Inspiring Pumpkin Carving Ideas You can Pull Off
By Monika ThakurAugust 10, 2022
100+ DIY Halloween Wreath Ideas for Front Door and Windows
By Megha SharmaAugust 5, 2022
This Humongous Dryer Helps Your Cat Overcome Bath Time Fears
By Atish SharmaAugust 1, 2022
Do it Yourself: How to Recaulk a Bathtub?
By Priya ChauhanJuly 26, 2022
Leave A Reply Cancel Reply