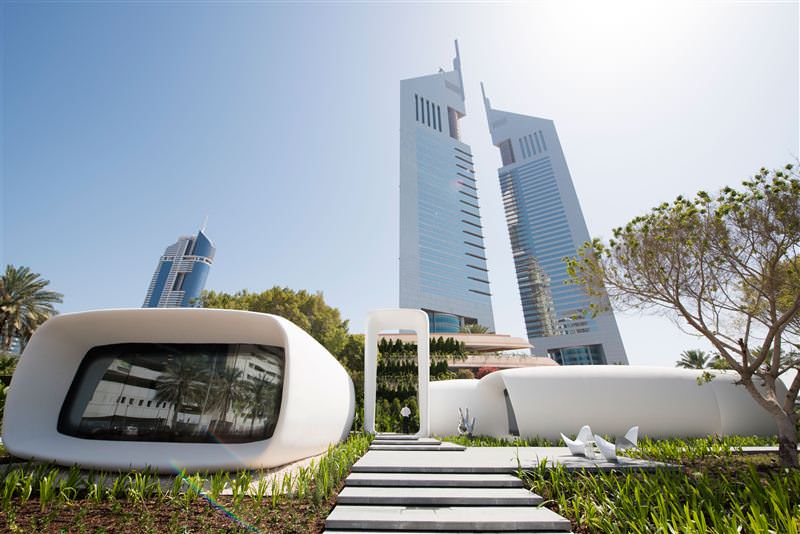 Dubai never misses a chance to mark its presence in the global market. This time around, they did it again by appearing as one of the major incubators of innovation and future technology. The city with a rich collection of high rises and structures supporting different architectural styles is again in the news for building a 3D printed office. Dubbed Office of the Future, it is the world’s first 3D printed fully-functional office building.

Inaugurated on May 23, 20216 by His Highness Sheikh Mohammed bin Rashid Al Maktoum, Vice President and Prime Minister of UAE and Ruler of Dubai, Office of the Future will be a temporary workplace of the Dubai Future Foundation nestled in the premises of Emirates Towers. The 2,700-square-foot single-story building that is built by a 120-foot tall 3D printer took only 17 days to complete. The printer featuring a special robotic arm to carry out printing process used a special mix of concrete, glass fiber reinforced gypsum and fiber reinforced plastic for the construction process. Efficient and time-saving, the complete cost incurred in construction is mere $140,000, which is half the price incurred in building a new structure using conventional method.

Minimizing the labor cost by 50 percent, the person involved in printing process includes one staff to monitor the 3D printer, a group of seven people who installed the components and a team of 10 specialist and electricians who took care of both electrical and mechanical engineering.

The project is a part of Dubai 3D Printing Strategy initiative to harness potential of the promising technology to promote national economy and humanity. The initiative aims to make Dubai a leading hub of 3D printing by 2030. Featuring all basic amenities like electricity, water, telecommunication and air-conditioning, the energy-efficient building includes large window shades to safeguard people sitting inside from sun and heat.

Other dignitaries presented at the inauguration ceremony were Mohammad bin Abdullah Al Gergawi, Minister of Cabinet Affairs and The Future, Obaid bin Humaid Al Tayer, Minister of State for Financial Affairs, and a number of other senior officials.