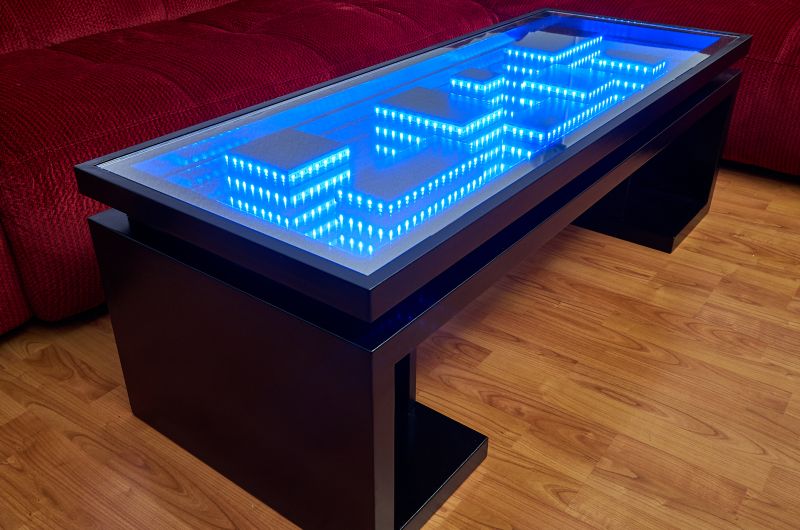 An Imgur user[SchrompSchromp] found himself in a fix, while he was working on his bachelor thesis because his old sofa had given-up, and very badly required a replacement. But the irony of the situation was that, the new couch he had bought was bigger than the old one he was using.

No sooner than he realized that the coffee table, because of its small size was not going well with this new setup. Now it was a situation where he had to go for a new coffee table to balance the difference.

Having had spent a decent amount of money on the new lounger, he decided that it would be great idea to build one himself. So, he started spending more time on the internet looking for ideas to craft his new creation, and eventually found an infinity mirror table that had led strips arranged as a city silhouette.

The user knew, he had found what he was looking for, and decided to apply the same principle in his coffee table too. The only exception, he decided to have in his table, was to build USB charging sockets for smartphone and Wi-Fi controlling facility.

Entire coffee table is made-up of four segments – top to bottom. The top layer features a two-way mirror, while the bottom mirror, that also holds all the LEDs as well as the city blocks forms the second layer of the furniture.

On one side there are two USB ports, for charging smartphones, laptops etc. The third layer consists of a wooden board with a hole, which apart from providing stability to the table also acts as a housing unit for various electronic components. Fourth and the final layer includes the foot-rest to comfort the users.

The infinity mirror effect is created by the LEDs strips emerging from 1-cm x 1-cm holes and are hidden inside the city like small boxes. Light emitted from these light sources is completely reflected on to two-way mirror above, which is further reflected back onto the bottom mirror by the top mirror.

Some of this light escapes out from the two-way mirror, making the top mirror transparent, reveling the inside city of the table. Since the light has travelled twice its length of the gap, so the LEDs now appears much deeper inside the coffee table.