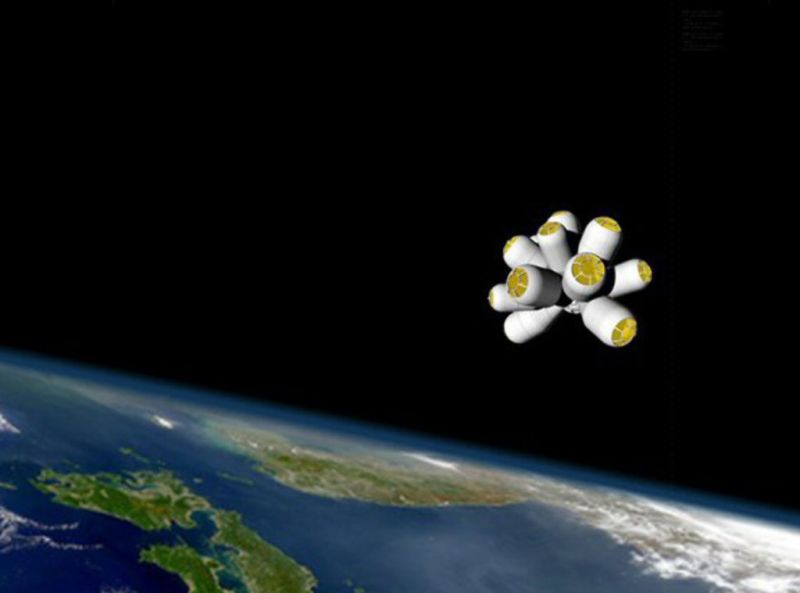 When you hear somebody talking about space hotels, probably you’re drawn into elicit memories of science fiction films, but there are several companies around the world who are setting up a new frontier in space travel. Space tourism has been around for a while, but it has been nothing more than a dream for the general public due to higher costs.

Besides giving a thrilling opportunity to explore the outer space, it can lead to other benefits as well. The space tourism can inspire future generations to take interest in space technology, and also help to minimize the space debris. Imagine if space agencies start repurposing decaying spaceships into vacation accommodations.

If we look back into the history of space tourism, several agencies have proposed designs for space including Elon Musk-led SpaceX, who has planned to start private flights in its Dragon 2 spacecraft to moon in 2018.

This orbital space station was proposed by Xavier Claramunt of Spain-based aerospace design company Galactic Suite in 2007. Due to some investment issues, there’s no clear statement about the project till date. As per the earlier design concept, it features a central hub with a dozen modules radiating outwards, serving as separate bedrooms for different people. This space hotel would be somewhat look like the shipping container home that looks like a starburst.

In September 2010, Russian aerospace firm Orbital Technologies had initially proposed to build a Commercial Space Station (CSS) in low Earth orbit. The multi-million dollar project aims to build four cabins measuring 20m³ to accommodate up to seven people. Currently, it is in design and development stage so till date you can only view the renderings of the proposed space hotel.

Also Read: Take a sip from the universe with these galaxy-inspired ceramics

American space technology startup company Bigelow Aerospace launched the Inflatable space habitat through SpaceX rocket and attached as a new room on the ISS last year. Currently NASA is testing its capacity to protect astronauts from space debris and radiation. While inflatable habitats seem to be a strange idea, they are much easier to get into space and can be a great way to boost space tourism.

The Bigelow’s CSS consists of several habitat modules including two Sundancer modules and one B330 module.

Luxury space hotel on the ISS by RKK Energia

Russian space station contractor RKK Energia who’s well known for flying fare-paying passengers to outer space, has proposed to build an orbital hotel module costing about 16.4 to 26.2 billion rubles ($279-$446 million) on the International Space Station (ISS). It would be a 20-ton, 15.5-meter-long module that will provide 92-cubic-meters of pressurized space. There will be private cabins complete with medical and hygiene facilities. Each room features a porthole, while there would be a giant window in the lounge area of the module.

Long ago, Japanese construction giant Shimizu has revealed its plans to open a space hotel by 2020 in order to capitalize the ongoing trend of space tourism. The space hotel will be powered by solar energy and would feature a microgravity recreational area for guests to enjoy sports, have food, and gaze at the Earth and stars.

Related Posts
This Glamping Luxury Hotel is Located at a World Heritage Site in Columbia
By Harshendra MehtaDecember 1, 2022
Famed Joshua Tree’s Monument House is Now Rentable
By Atish SharmaNovember 18, 2022
Hobbit-Inspired Tiny House Near Smoky Mountains is Calling Out Loud
By Happy JastaNovember 15, 2022
America’s Most Haunted Hotels You can Stay in for Spookier Halloween
By Priya ChauhanOctober 13, 2022
Leave A Reply Cancel Reply