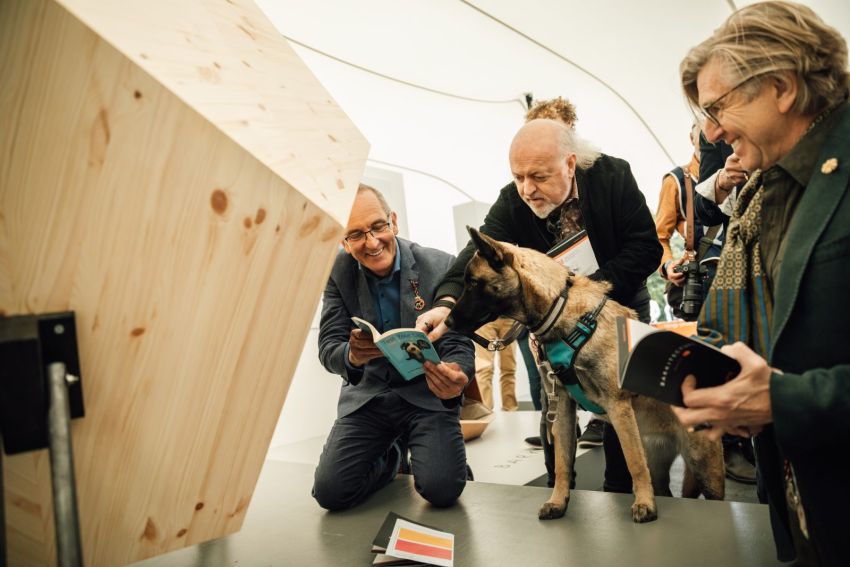 The stakes were high at the 2022   Barkitecture Competition. It was the Foster + Partners architectural group pitted against the Rogers Stirk Harbour + Partners who in collaboration with Mark Gorton architectural group designed a space-age style dog kennel that was the favorite to beat the geodesic dog kennel by the Foster + Partners. What everyone thought would be a dog fight between the two architectural giants, Birds Portchmouth Russum sneaked out of nowhere to win the Barkitecture Competition 2022 with its Bonehenge doghouse.

Below we look at our three favorite designs from the event, which is a part of the Goodwoof dog festival held at Goodwood House in West Sussex and were sold in the Bonhams Auction on Sunday 29 May.

As evident from the name, the inspiration behind the design and the name is obviously the Stonehenge. It’s not an enclosed space where canines might feel suffocated, unlike in other doghouses. The design features timber dog bones as the walls, that keeps the dog house airy and fresh all the time. Kudos to the sustainable design that harvest rainwater at the top of the house which features a dog bowl. In addition, the airy design also offers generous lighting inside the dog abode. Thus, ticking on all the boxes, the jury members hailed it as the winner of the competition. Bonehenge was sold for $3,150. Birds Portchmouth Russum told Homecrux,

We are really delighted as there was a very strong field of entries by prominent architects . It’s extraordinary that 20 architects can conceive such a wide array of interesting solutions. That said our client ‘Illy’ is less than enamoured that her home was sold off – we must quickly make Bonehenge Mark 2.

Dome-Home by Foster and Partners

This was the initial favorite to win the competition before Birds Portchmouth Russum Architects ruined it for them. Featuring a geodesic shell structure, the Dome-Home is a luxury dog house made using cherry wood and fine timber. Adding luxury to the woody exterior is a flexible padded fabric liner smoothly incorporated into the interior of the doghouse. In case, the liner get a little shabby, it can even be removed for washing.  The Dome-Home was sold for $5,804.

Also Read: Dog House hit by Meteorite is up for Auction, Estimated to go for $200K

Rogers Stirk Harbour + Partners and Mark Gorton collaborated to design a Dog-Pod which any Star Wars aficionado would love to buy. The doghouse is a space-age style home and boasts a tubular, hexagonal form. The entire structure is poised on adjustable, lunar landing-style feet that raise the kennel slightly above the ground. The Dog-Pod features a hexagonal door that transforms into a star ship-style boarding ramp once opened. As far as the design material is concerned, there is an aluminum canopy sits atop Dog-Pod. The Dog-Pod was sold for $1,261 at the auction.

Related Posts
Furniture Designed for Pets and Humans Lets Both Live in Utmost Synergy
By Monika ThakurSeptember 27, 2022
This Stylish and Minimal Stool Doubles as Pet House
By Atish SharmaSeptember 15, 2022
Wicked Egg is Automatic Interactive Toy and Treat Dispenser for Wicked Pets
By Happy JastaSeptember 1, 2022
Lounge Chair With Cat Tunnel Lets You Play and Relax Together
By Atish SharmaAugust 30, 2022
Leave A Reply Cancel Reply