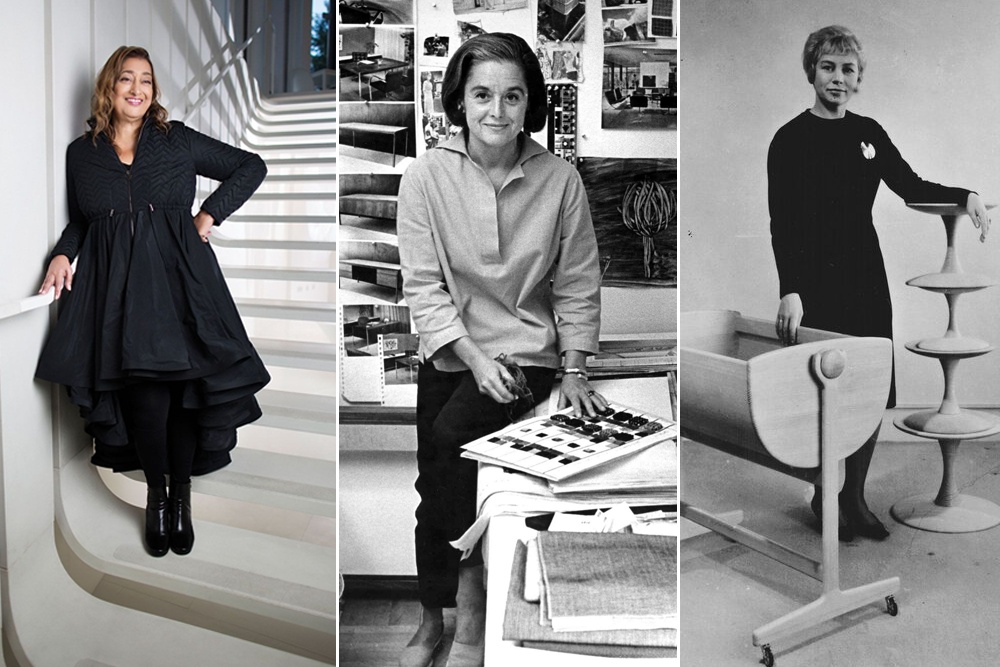 Being a man myself, I am not a disparager of the Y-chromosome. But, I cannot deny the struggle, casual sexism, and pay disparity women have to go through lifelong. Defying all odds and breaking all stereotypes, some women have held their ground to pave way for a generation of women designers to rule the industry.

From ‘Torches of Freedom’ to bagging designer of the year awards, women have left their footprints in every field they encompass. In light of International Women’s Day 2022, we have compiled a list of five women designers and architects to celebrate their legacy and contribution to the world of design. These women are known to have broken the mold and inspired a generation of female designers and architects to carry the baton forward.

Gone are the days when architecture was considered unfeminine. One person who changed the notion forever is an Iraqi-British architect, Zaha Hadid. Proudly known as the Queen of the curve, the designer and architect was the first woman to bag the Pritzker Architecture Prize in 2004.

Born in an upper-middle-class family, Zaha’s childhood revolved around trips to various cities around the world further intriguing her interest in architecture. Determined to do something special, she completed her formal education at the Architectural Association School of Architecture London and the American University of Beirut Lebanon.

Some of her famous projects include Vitra Fire Station, Weil am Rhein (1994); Phaeno Science Center, Wolfsburg (2005); Guangzhou Opera House, Guangzhou (2010); and Riverside museum, Glasgow (2011). Inspiring a generation of female designers, the architect left for the heavenly abode in 2016 leaving a void in the architecture industry that would be difficult to fill.

If you have read ‘Democracy in Desperation’ by Douglas Steeples, you’d recall the American society of the 1890s. History remembers those who don’t bow down to the odds and are up against deflation, depression, and adversity. Born in Santiago Chile, Sophia Hayden was one such name that was motivated to take women’s architecture to another level. Being the first woman to graduate from MIT’s four-year program in architecture, she completed her thesis in designing fine arts museum.

Being one of the first women architects, she found it hard to break the barrier, yet she designed The Women’s building at the World’s Columbian Exposition in 1893, when she was just 21. Hayden’s building received an award for “Delicacy of style, artistic taste, and geniality and elegance of the interior.” Despite retiring at an early age and never designing again because of rifts and personal reasons, she sowed the seeds of change in architecture which was further capitalized by the young women designers and architects in America.

Danish design brand Gubi recently unveiled the famous 1970s collection of rattan furniture as a tribute to the late Italian designer Gabriella Crespi. Invariably, the most beautiful woman from Milan who enjoyed immense success in design laid the foundation for a strong future for a lot of female furniture designers.

Born in 1922, she was highly inspired by the works of Le Corbusier and Lloyd Frank Wright. Her initial career started in the early 1950s, but the pinnacle of her creativity came in the 1960s when she started working with Maison Dior. Known for sculptural furniture design, Gabriella Crespi gained an elite place among the 20th-century furniture designers with her “Plurimi” series (1970-1982) and the “Z Line” (1972-1974).

Apart from her passion for art and architecture, the designer also had a knack for nature and zeal for a spiritual drive, which led her to retire from the field at the age of 65 and spend a decade or so in the Himalayas. The legendry designer would’ve been celebrating her 100th birthday this year, but she died in 2017 leaving her designs behind for other women to cherish and take inspiration from.

If Zaha Hadid and Gabriella Crespi were the pillars of women’s design and architecture, Florence Knoll was its beam. If there was someone leading the charge of post-war architecture and design, it was the lovely lady from Saginaw, Michigan. Born in 1917, she was enrolled at Kingswood school where her talent was recognized by then famous furniture designer Eliel Saarinen.

Practicing the philosophy of total design which changed to modernism, Knoll is famous for modernizing interior design for homes, offices, and workplaces. Some of her famous designs, which are still in production today, include the Diamond Chair, Barcelona Chair, and the Cyclone Table. Her passion for design was so impeccable that she even came out of retirement to design a mini retrospective of her work.

It would be an offense to end the list without mentioning Nanna Ditzel. The Danish designer was born in 1923 in Copenhagen. One of the most underrated designers of her time, she transpired the future of Scandinavian design. Some of her famous works include the Sausage Chair, Hanging Egg Chair, and the Trinidad chair. She might not have received international acclaim but is a role model for a lot of Danish women designers.

To work in a male-dominated society and pull off multiple projects to perfection, she thrived on the mantra of minimalism and Scandinavian art much before it gained popularity among the masses. The designer died in 2005 but left a golden future for a lot of women who want to pursue design today.

Ukrainian architect Janna Kiseleva told Homecrux, “Design and architecture is a profession of care, sensibility, and optimism. It is woman that tends to take care of family and loved ones. I am inspired by these women because they managed to combine family care and concern for the future in their projects.” Homecrux pays homage to all the women architects and designers in the world who are the winds of social change and stand toe to toe with men.

Related Posts
Snøhetta Designs Three Star-Shaped Christmas Decoration to Raise Charity
By Atish SharmaDecember 5, 2022
Importance of Color Scheme in Interior Design and How to Choose the Right One
By Harshendra MehtaNovember 26, 2022
20 Easy Recipes to Make Ahead of Thanksgiving
By Monika ThakurNovember 17, 2022
Everything You Need to Know About TV Wall Mounts
By Monika ThakurNovember 15, 2022
Leave A Reply Cancel Reply