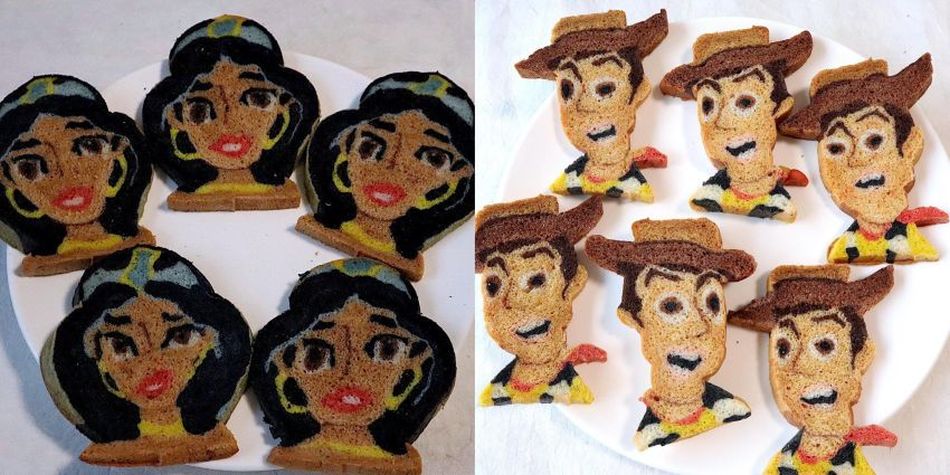 Food art has been in trend. There are many food artists experimenting with materials, textures, and colors. Take Instagram user Izuyo0719 for instance, who makes beautiful bread shaped as various famous characters. Be it Woody from Toy Story, chubby Winnie the Pooh, Elsa from Frozen, or Santa Claus you’ll find many adorable subjects among the bread art.

Usually, artists prefer to decorate bread with chocolate only after it is baked. But, “the super deco bread” by Izuyo0719 is surprisingly made directly from dough and turned into the bread identical to the face of a famous character.

The artist makes bread that carries the same picture or design on the inside, as seen on the outside. She also bakes bread that changes its patterns after being sliced. Not only famous characters, but small and mundane, yet subjects such as flowers, stars, and small dresses can also be found among her bread art.

Bread art by Izuyo0719 features famous cartoon characters like Mickey Mouse, villains from children’s books such as Maleficent, famous movie characters such as Elsa from Frozen and Jack Skellington from The Nightmare Before Christmas and characters from the shows.

She has also recreated a few famous paintings such as The Girl with a Pearl Earring, which was originally painted by Johannes Vermeer, along with simple everyday objects as subjects.