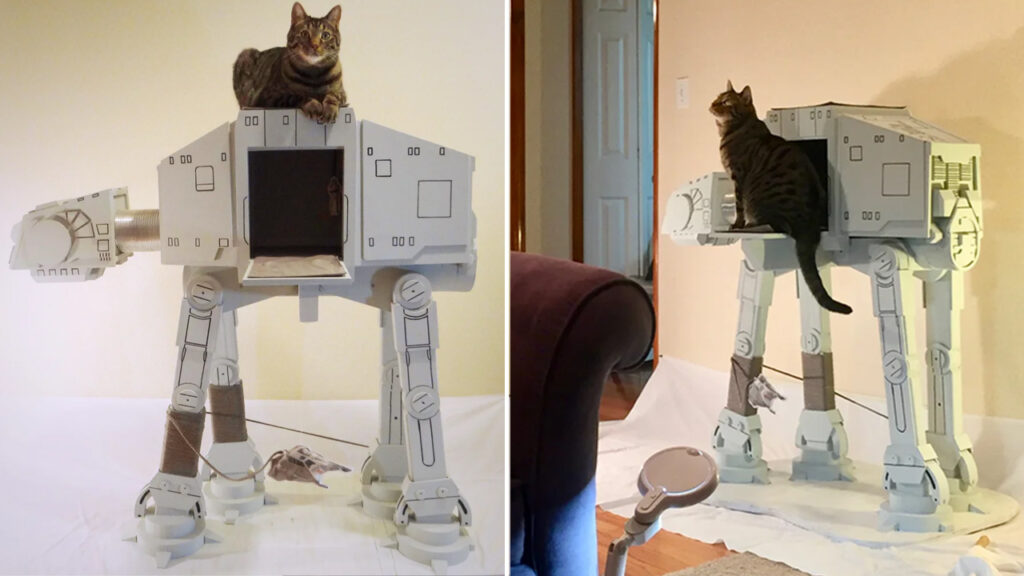 Do you love your cat enough to give her an option to perch on a gigantic four-legged combat vehicle used by the Imperial ground forces? If you’re Whitney Fabre perhaps you wouldn’t have a second thought!

As particular cat parents, we have reservations about what we give to our cats. If you believe it’s not too intimidating for your pal and she’d love climbing into one; Fabre has posted detailed instructions you can follow to build one of these incredible AT-AT Walker-inspired cat homes for your cat.

The CAT-CAT – as it’s called – is an impactful cat tower for Captain Jack Harkness, Faber’s cat named after the character in Doctor Who. A definite build to strike fear in the enemies’ hearts, the AT-AT cat house is well accepted by Capt. Harkness, Faber notes in here DIY guide on Instructables.

Also Read: 20 Designer Cat Beds You and Your Cat Will Love

It is made of plywood, from the ground up, and has been detailed to be cat friendly. The AT-AT legs are used as scratching posts and toys like mini Stormtroopers and a Snowspeeder have been wrapped around them. The boarding hatch is nicely cushioned for the cat to relax in, while a cantilevered plank outside offers the feline friend a vantage point to keep an eye on her humans below.

Fortunately, the CAT-CAT doesn’t walk around. So, it’s that much less fearsome for our cause. Present your cat with an AT-AT cat house you’ve built, brace her in imperial uniform, and your Star Wars theme is complete!

Related Posts
Biophilic Design: A Simple Guide for Green Interior Design Trend
By Sameer KumarAugust 16, 2022
Amazon to Pry Into Your House With Roomba’s Clean Image as its Eyes
By Atish SharmaAugust 14, 2022
How to Choose the Perfect Coffee Table for Your Dream Living Room
By Sameer KumarAugust 11, 2022
70+ Inspiring Pumpkin Carving Ideas You can Pull Off
By Monika ThakurAugust 10, 2022
Leave A Reply Cancel Reply